This image shows gullies in an unnamed crater approximately 25 kilometers (16 miles) in diameter and 1.2 kilometers (0.75 miles) deep, located south of Terra Sirenum. Several features associated with this crater suggest that, at some point in time, liquid and ice may have been present at and near the surface.

A MOC context image of this crater shows the typical lobate ejecta pattern characteristic of rampart craters, interpreted by some as indicating ice-rich or water-rich materials was excavated at the time of impact. According to this theory, the rock debris ejected from the crater and mixed with the water flowed more easily along the surface. Other possible interpretation is that fine-grained rocky material mixed with air and formed the rampart pattern in the absence of water.

The HiRISE image shows gullies not only in the inside of the crater, but also in the outside, emerging from the elevated rim of the crater (NW corner of the image). The subimage shows one of the outside gullies; illumination is from the left, downhill is up. The box-like shape of its alcove suggest this gully may have been produced by groundwater sapping, as opposed to surface runoff.

Polygon patterns are ubiquitous in this image: on the walls of the crater, on its floor, and on the walls of some of the gullies. These polygons are similar to features observed in terrestrial permafrost such as in the Arctic and Antarctic. Polygonal patterns are produced by repeated expansion and contraction of frozen soil, due to seasonal temperature cycles. 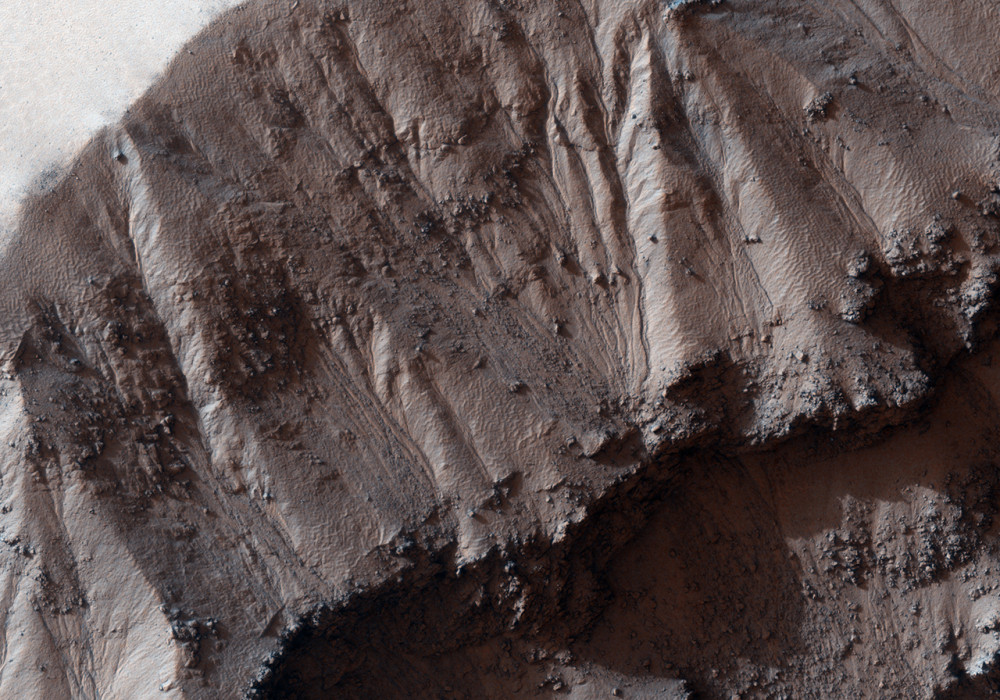