HiRISE at One Year: Student Image of the Week-Seasonal Changes of South Polar Dark Dune Field

This image was suggested by Andras Sik’s SUPERNOVA astronomy and space research class at the Alternative Secondary School of Economics in Budapest, Hungary.

They interpret the image: “During local springtime, a varying albedo pattern can be observed on the surface of dark intracrater dune fields in the southern polar region of Mars. The origin of dark dune spots and the dark slope streaks emanating from them is yet uncertain. There are several possible explanations for these phenomena, like “sublimation of carbon-dioxide frost cover”, “dusty carbon-dioxide gas eruptions through the frost cover” and “transient liquid water-formation under layered water-ice/carbon dioxide-ice cover”. In this HiRISE image the distribution of dark streaks are not chaotic and their shapes are not fan-like; rather they are composed of confined, dozen-hundred meter long branches which follow the local topography and have accumulation zones at their end.”

We are learning a great deal from the enigmatic dark spots that are found throughout the south polar region. These dark spots may have resulted from cold gas jets that form by sublimation of the ice bringing entrained dust to the surface. Small dark streaks may have formed by avalanches of sand or they may be patches of coarse-grained ice that are clear enough so that the dark material below the ice is visible.

The color image also provides helpful clues to understand this process. Bright white frost can be seen covering the surface. This frost is a probably a combination of frozen water and carbon dioxide ice. These bright patches are particularly prevalent along dune slip faces and around dark spots.Written by: Alix Davatzes (HiRISE challenge caption)   (18 November 2007) 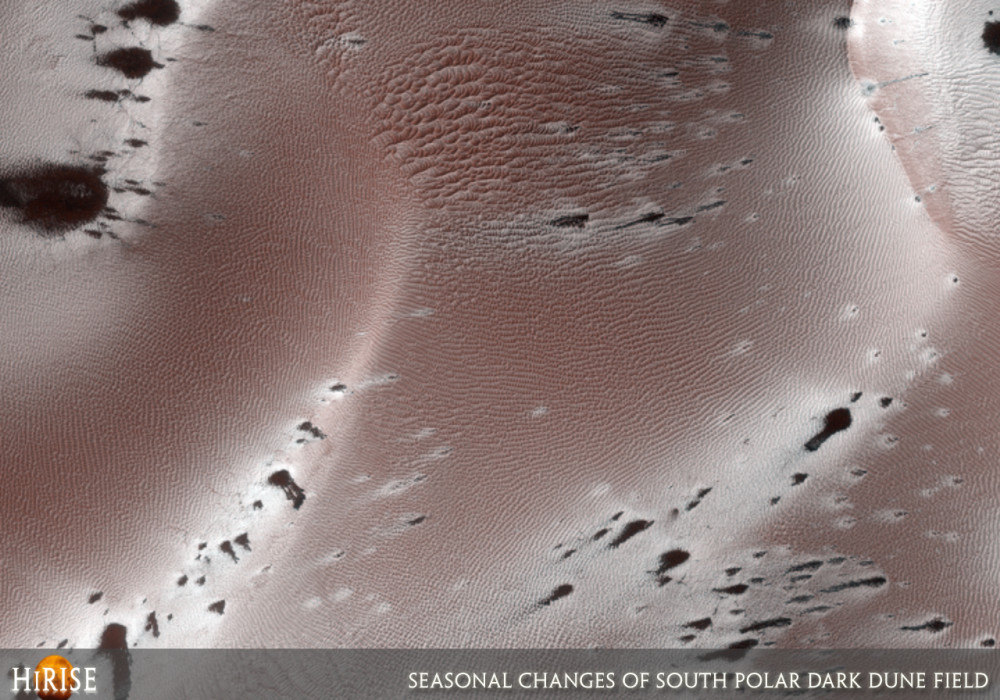