HiRISE Student Image of the Week: Intersection of Hyblaeus and Elysium Chasmata

A cross-section of Hyblaeu Chasma is visible in the first subimage . The chasm seems to be filled with a resistant light-toned layer, about 200 meters thick (likely consisting of cemented windblown sand and dust) forming a mantling unit and overlying more resistant boulder-rich layers. The sand and dust was likely blown into Hyblaeu Chasma after it was formed by tectonic processes, possibly in combination with fluvial processes. The chasmata were subsequently broadened by hillslope erosion: boulders are strewn along the top of this dusty mantling unit. Slumping, possibly caused by faulting, along the southern wall of Hyblaeus is visible at the intersection with Elysium Chasma.

This image also shows a number of dark streaks along the walls of Elysium Chasma, further to the south. One fresh-appearing streak divides around a slight ridge in the second subimage (about 1 kilometer across). Other smaller, fainter, possibly older streaks have formed on either side of this ridge, producing a herringbone-like pattern. A number of explanations have been suggested for these streaks, including the idea that they are formed by dry avalanches of dust.
Written by: Ginny Gulick   (16 February 2008) 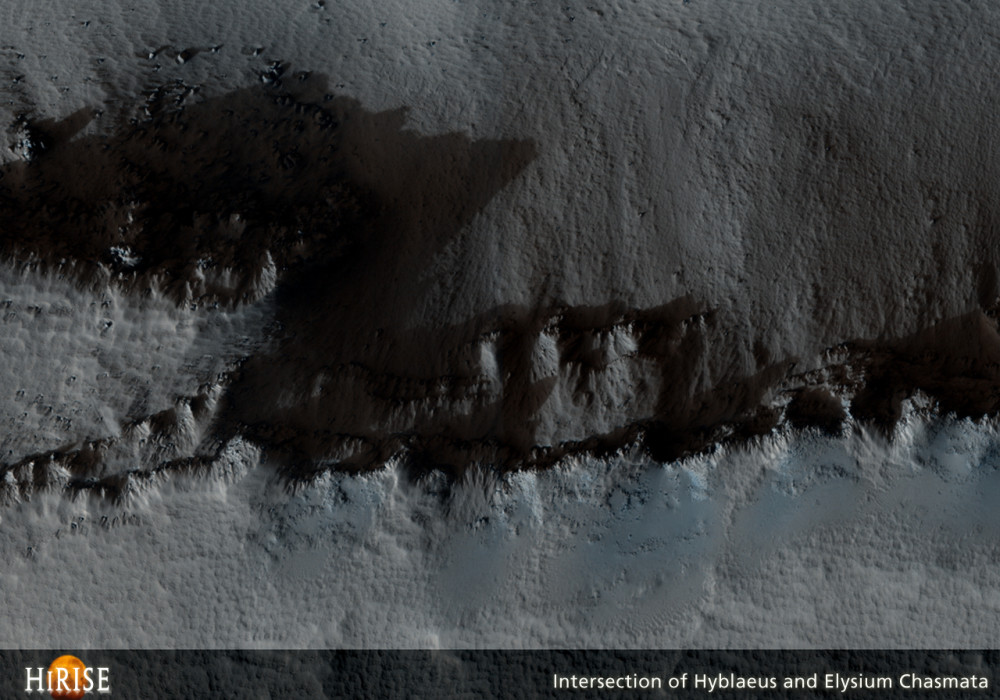