Holden Crater Megabreccia: A Telltale Sign of a Sudden and Violent Event

This HiRISE image covers the southwest portion of the terraces and floor of Holden Crater situated in southwest Margaritifer Terra.

Breccia is a rock typically consisting of rock fragments of various sizes and shapes that have been broken, tumbled and cemented together in sudden geologic event (e.g., a landslide, a flashflood or even an impact-cratering event). If it were not for the dark sandy dunes dispersed throughout, this image could easily fool an expert into thinking that this image is actually a photograph of a hand sample of an impact breccia.

The prefix “mega” implies that the breccia consists of clasts, or rock fragments, that are typically bigger than a large house or a building. The rectangular megaclast near the center of the image is a colossal 50 x 25 meters (approximately 150 X 75 feet). The crater likely experienced extensive modification by running water, which is supported by observations of drainage and deposition into the crater from a large channel (Uzboi Valles) breaching Holden’s southwest rim.

While it is possible that the megabreccia formed from a catastrophic release of water into the crater, a more likely possibility is that it formed from the impact that created the approximately 150 kilometer-in-diameter Holden Crater. Popigai Crater, a terrestrial crater of half the size of Holden, possesses a similar occurrence of megabreccia with a comparable range in megaclast size to the Holden Crater example.

An impact-generated megabreccia deposit, as observed in terrestrial craters, typically lies beneath the crater floor, so the exhumation of the megabreccia may be the result of down-cutting and erosion of water that once flowed through Uzboi Valles. 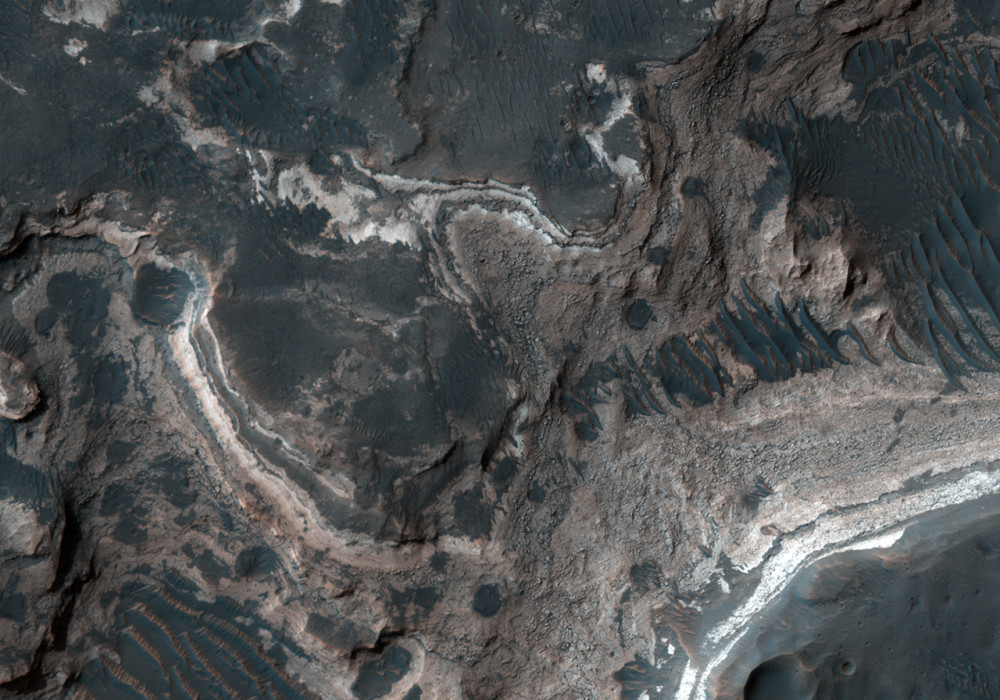