Larissa Beckstead’s third grade class from Sunridge Elementary School, in Phoenix, Ariz., suggested this target. When tasked with writing a figure caption, the class wrote: “Iberus Vallis looks like it has been carved by water. The shape is curved and looks like a river. The bends in the channel show how the water changed direction like rivers on Earth. The sides of the channel are high so it looks like Iberus Vallis has been there a long time. The less deep channels that branch off the main channel may have been caused by overflow of water. The shape of Iberus Vallis is evident that water was there at one time. Iberus Vallis is in the northeastern hemisphere of Mars. The channel is located on the southeast side of what looks like a volcano. It appears to be going down the side of the volcano.”

In fact, Iberus Vallis is a valley to the southeast of Elysium Mons, a large volcano in the northern hemisphere. This image is located at 21.5 degrees north and 151.5 degrees East. Within the valley, many large boulders are resolved in the HiRISE image ( see subimage ; 713 x 591, 1.2MB ). A thick resistant layer is exposed at the top of the wall, as are some thinner resistant layers below.

Three unusual mounds ( see subimage ; 704 x 584, 1.2MB) are present in the channel. Their origins are unknown, though they could potentially be ice-cored mounds.

Dust fills much of the floor of the valley, and has been moved by the wind to form dunes. Although water at one point carved this valley, it is now dominated by mass wasting (dry landslides) and aeolian (wind-driven) processes.Written by: Alix Davatzes and Larissa Beckstead’s class   (1 October 2007) 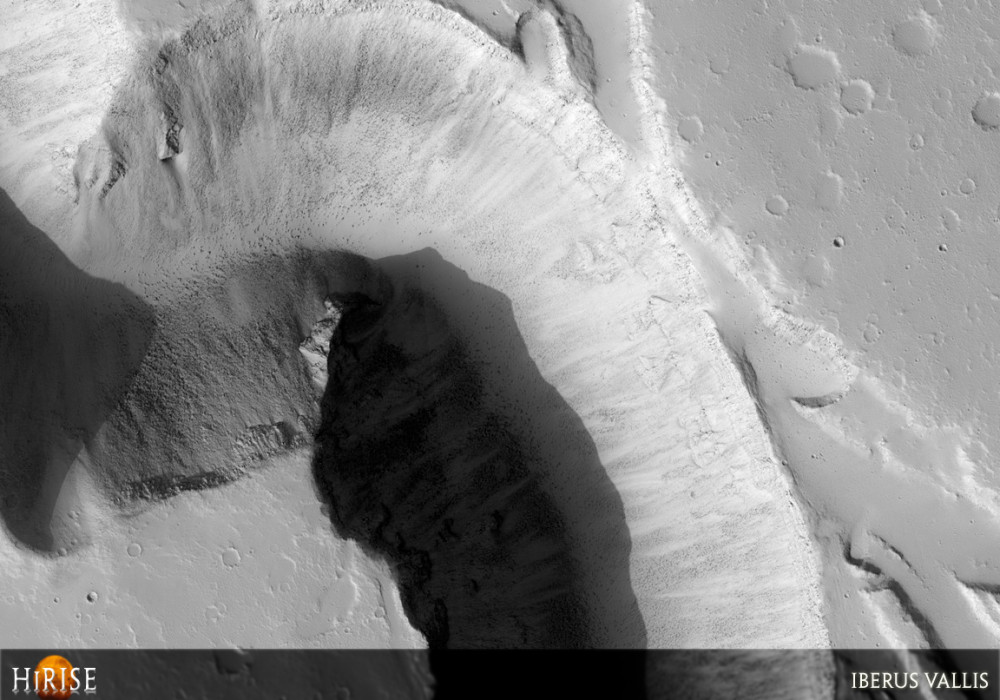