A thick (approximately 3 kilometer or about 2 mile) sequence of ice and dust, stacked like a layer cake, covers the south pole of Mars. Impact craters that form here experience slightly different processes of modification and degradation than those that form in rocky areas.

One example of such a process is sublimation. Most of the material that makes up an icy crater is volatile, meaning it can melt or sublimate (change directly from a solid to a gas) if heated. Sublimation is more common on Mars because of its thin, dry atmosphere. Crater walls facing the Sun receive more direct light than their surroundings, and are therefore more easily warmed. If the ice in the walls sublimates, the rim structure of the crater becomes degraded.

The impact crater in this image is roughly 900 meters (a little over 0.5 mile) across. The remaining raised rim of the crater is illuminated from the bottom right of the image, causing preferential heating of the interior of the rim structure. The ice appears thin here (more brown material is exposed), with an even thinner cover on the remaining exterior rim. This could be caused by a number of possibilities: perhaps the exterior wall is steeper than the interior wall, resulting in more direct exposure to sunlight, causing more efficient sublimation when the Sun shines on that wall.

Once ice begins to melt, darker dustier material is exposed. The darker material absorbs more heat than white ice (just like standing in the Sun wearing a black shirt makes you warmer than wearing a white shirt, which reflects the Sun’s light), causing more and more ice to sublimate near the dark material. You can observe this process happening around the exterior crater wall in this HiRISE image. 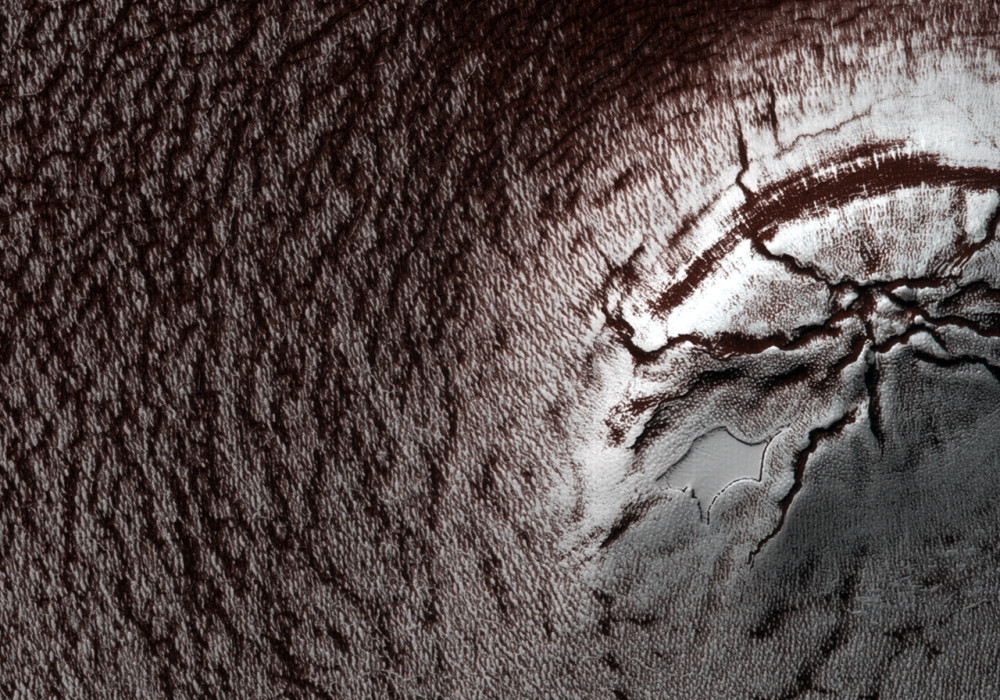