Here we have an impact crater (the large round feature, approximately 6.2 kilometers, or 3.9 miles, across) that intersects a series of faults (the linear features). The faults are seen to cut the circular rim of the impact crater. Also, the impact did not destroy the adjacent faults. These observations tell us that the fault was active after the impact occurred.

In addition, by measuring the distance of offset of the different pieces of the crater rim separated by the fault line (assuming that when the crater formed, the rim was continuous around its circumference), the amount of movement along the fault can be estimated, laterally and vertically. Faults like these cause troughs to form, called graben, of which the heavily shadowed one is a good example. The center (shadowed) section has been dropped downwards relative to the surrounding terrain, forming the trough.

It is also clear that parts of the crater rim are lower than others where the graben intersects the crater. The sides of the graben (the faults forming the walls of the trough) are sloped, so that the dropped-down part of the crater rim has also moved horizontally away from the higher part of the rim. The combined down-dropping and moving apart indicates that the land here is being stretched and pulled apart, called extension. By measuring the amount of offset on all the faults, we can estimate how much extension has occurred in this part of the planet.

This location is especially helpful because, as mentioned above, we have a good knowledge of the before-faulting configuration of the land, in which the crater rim was continuous. Finally, it is interesting that there is no sign of the fault on the floor of the crater  the floor has not been faulted and no part is down-dropped and stretched apart as the crater rim has been. This indicates that some infilling of the crater (perhaps by lava or airborne sediment) has likely occurred since the fault was active, burying the trace of the fault and representing a third stage of geologic history in this area. 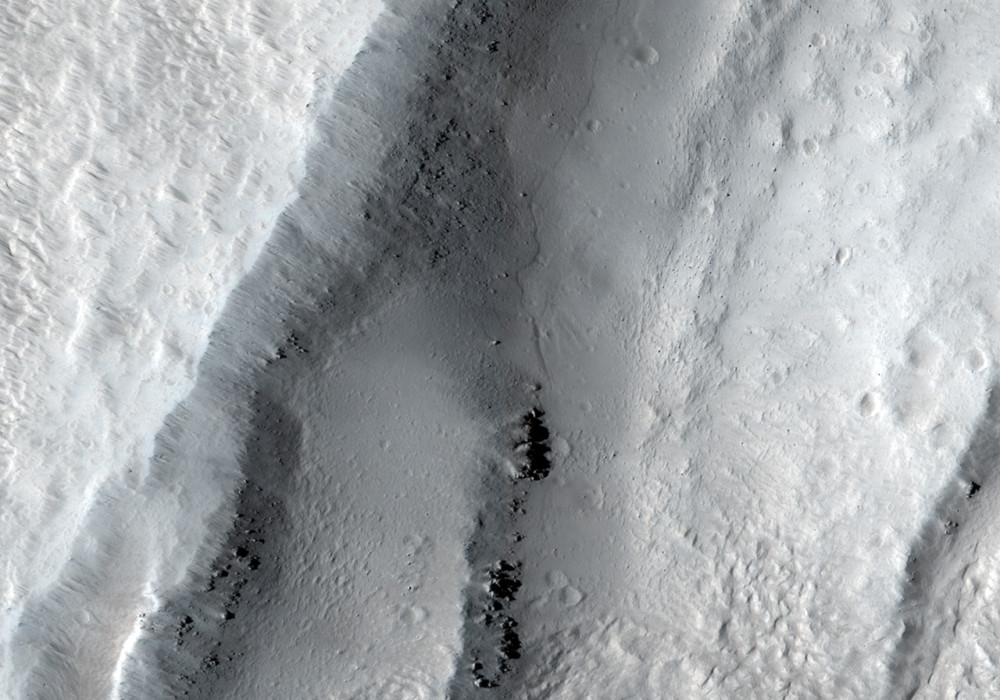