This image covers a portion of the ice-rich south polar layered deposits. Layers in the Mars polar regions are of great interest because layers in ice on the Earth, as in the Antarctic and Greenland ice caps, are known to contain records of past atmospheric, environmental, and climate conditions. By studying Mars polar layers, we hope to be able to understand the past climate and history of water on the red planet.

Of particular interest is the small, approximately 330 meter (360 yard) diameter impact crater. The number of impact craters on a planetary surface is often used to estimate the age of that surface (because the older a surface is, the more time that surface has had to accumulate craters, and thus the more craters that surface will have on it, assuming a constant cratering rate). The polar layered deposits on Mars are believed to be very young because there are no large craters on them and very few small craters. The high resolution of HiRISE will enable these craters to be studied in detail, perhaps allowing the number of craters—and thus the surface age—to be better constrained.

A problem with using craters to determine age on the icy polar layered deposits is that erosion of the icy substrate and relaxation of crater topography (i. e., relief becoming more gentle) is probably more rapid on ice than on harder rocky surfaces. A detailed study of craters in ice will help better to understand this process of how craters in ice degrade, or deteriorate, with time. Perhaps then we will know how to use the number and distribution of craters over the icy polar layered deposits in constraining the geologic and climate history of the Mars polar regions.Written by: Patrick Russell   (6 January 2008) 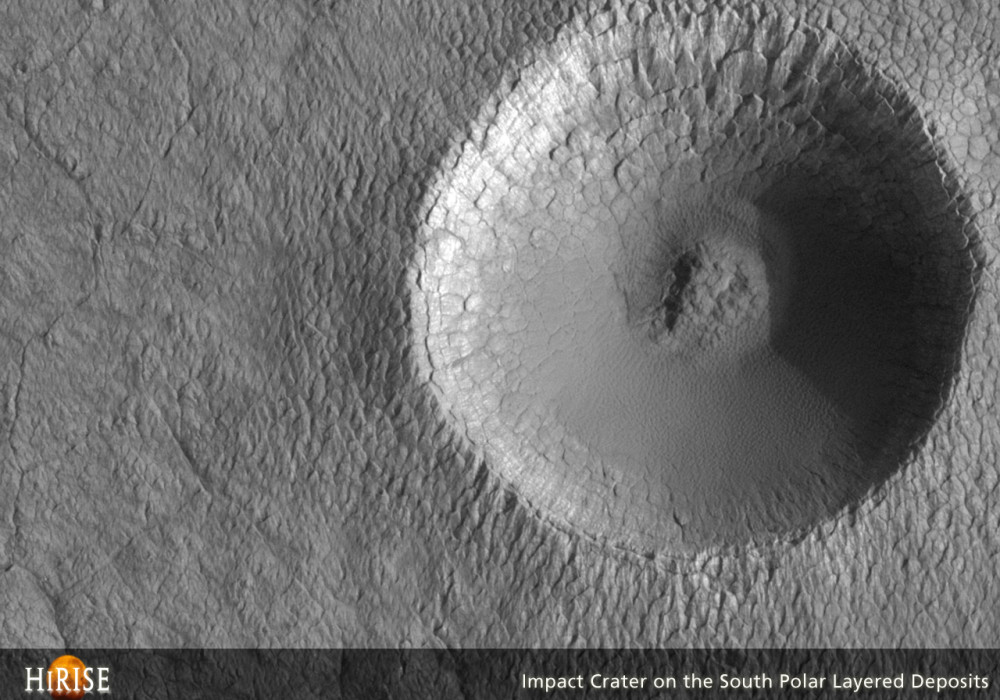