Impact Crater Teetering on the Edge of a Canyon

This observation shows the intersection of several geologic features at the edge of the huge Valles Marineris system of canyons on Mars.

The circular feature is an impact crater, roughly 4 kilometers (2.5 miles) across. To the south, terrain slopes downward over 4000 meters (13000 feet). Thinking of the crater like a huge drill hole and the canyon wall like a towering road-cut, both features provide a glimpse into the subsurface of the surrounding terrain.

In the curved north wall of the impact crater, and in the East-West trending, upper walls of the canyon (center of the scene), individual layers of rock can be traced laterally over hundreds to thousands of meters (thousands to tens-of-thousands of feet). The layers appear prominently in the wall because they are stronger, steeper, and more resistant to erosion than materials above and below, which form more gradual slopes.

In this scene, darker shadows help to distinguish the steeper, rock layers from lighter, gentler slopes, which are covered with broken rocks and dust. Such layers on Mars may have been deposited by the wind, in water, or by volcanic lava flows or ash falls. Thicknesses and sequences of layering can yield information about how many different events were responsible for their formation, the relative volumes of material involved in each event, and whether a repeating pattern of events of similar type and/or size exists.

The interaction of crater materials and the canyon adds an additional level of interest and complexity to the scene. Normally, when an impact into a layered planetary surface occurs, materials from the center of the crater are pushed downward or blown upward and outward (forming the hole in the ground), while the terrain immediately ringing the crater is tilted upwards to form a relatively narrow, sharp rim as exemplified along the north and southeast edge of this crater. However, the southwest rim of this crater is wider, extends further away from the crater center, is not as circular, and contains several discontinuous pieces of ridges. Either this wall of the crater was pushed further outwards and stretched because the impact occurred near the edge of the canyon (basically allowing the impact to push the wall part-ways over the edge of the canyon), or erosion and expansion of the canyon after formation of the crater has partially undercut the crater wall, causing the wall to slump downwards and outwards.

In either case, it may be possible to learn something about the impact-induced damage and disruption caused in the ground below the rim of a crater; about the strength and structure of post-impact materials in the crater wall; about the effects of impacts on layers farther away or below the crater, and about processes of erosion, canyon growth, and crater formation. 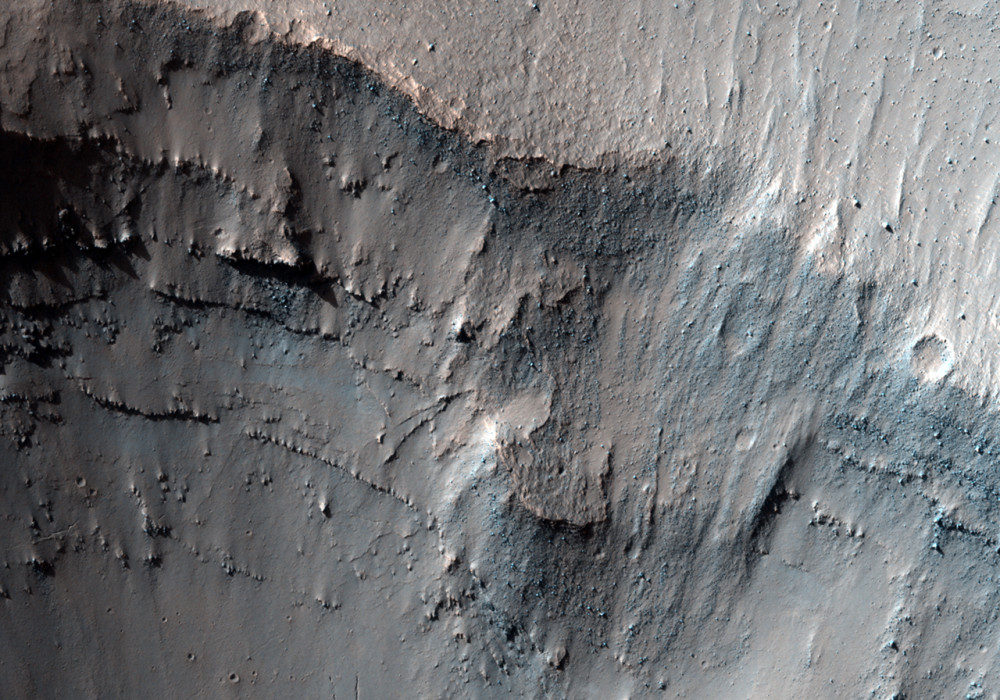