HiRISE has covered these impact sites with two images (this and showing the impacts in greater detail, and also revealing a large number of new small impact sites. A mosaic was made (50MB) from portions of the two map-projected HiRISE images at 0.5 m/pixel, with white boxes around the four large impacts and a number of smaller impacts.

We were expecting to see just two impacts sites here–from the tungsten blocks–and it is highly unlikely that these dense blocks broke apart in the atmosphere. The only other source of impacts at nearly the same time and place is the cruise stage itself, which was more likely to break apart in the atmosphere. The impacts were highly oblique, as shown by the asymmetric morphologies of the individual impacts and the elongation of the strewn field.

The large impacts created craters with diameters ranging from 3 – 5 meters diameter, about what was expected from the 75-kilogram tungsten blocks. Which two of the four impacts came from the tungsten blocks? The two central impacts that are close to each other and of similar size probably originated from the tungsten blocks. The other two impacts, which have more asymmetric ejecta, may be from the cruise stage, which broke apart into two main pieces. The many smaller impacts may have been formed by secondaries from the large impacts and additional pieces of the cruise stage.

Although hundreds of new impact sites have been imaged on Mars, we do not know the initial size, velocity, density, strength, or impact angle of the objects. However, for the MSL hardware we do have such information, so study of this impact field will provide data on impact processes and Mars surface and atmospheric properties.

The MSL descent stage later released six 25-kilogram tungsten blocks from a much lower altitude, whose impact markings have been imaged by CTX . 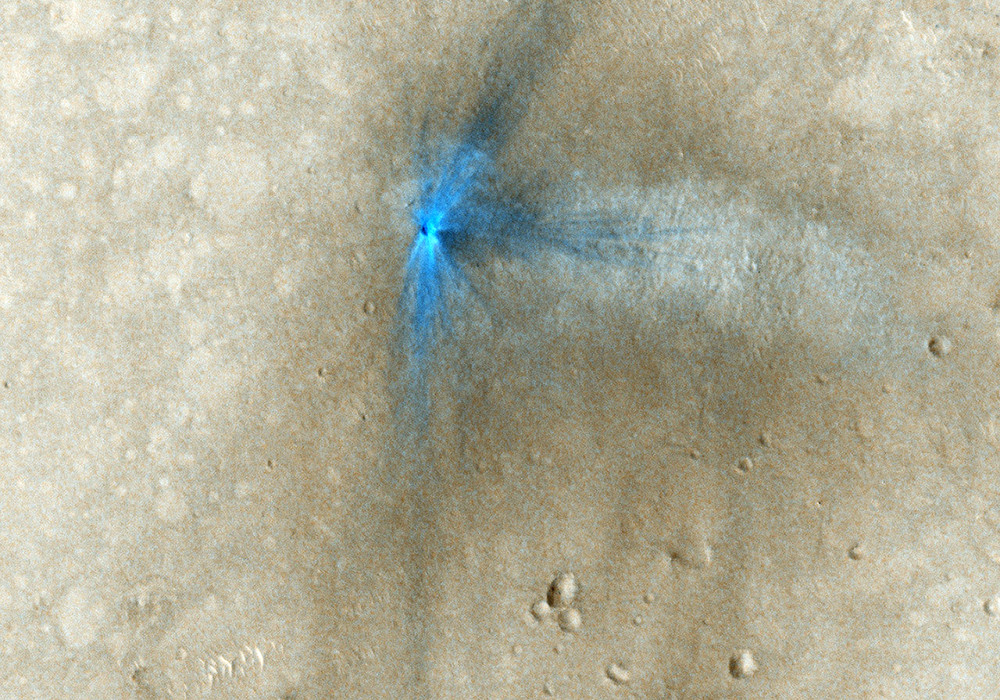