The polar deposits of Mars are among the most geologically active on the planet today. This image illustrates several processes affecting the polar landscape both today and in the recent past.

Frost streaks cross this image from upper left to lower right and are a testament to the power of the wind to redistribute material in this region. In the center of the image lies an impact crater about 130 meters across (425 feet). Craters on the polar deposits are rare because the very active surface processes remove them quickly. This particular crater is likely to have been formed less than 100,000 years ago, which is very recent in geologic terms. Streaks of material emanating from the crater rim have been created as the ice and dust being transported across the surface by the wind encounters that obstacle.

Although its initial depth was probably about 25 m (80 ft), the crater has been infilled with ice and dust and is now quite shallow. However, in one portion of the crater (lower right), the fill material has been removed, creating a pit adjacent to the crater wall. This pit contains a fresh deposit of ice and may be in the beginning stages of being infilled again. These cycles of infilling and erosion will eventually erase the crater from the landscape.

Scientists can examine many of these craters at different stages in their lifespan, from the very fresh to the almost erased. Using these data we can make estimates of how active this part of the martian surface is today. Of course we need to find these rare craters first! Craters this size are usually about 200 km (125 miles) apart in this region, with the intervening landscape being relatively featureless. 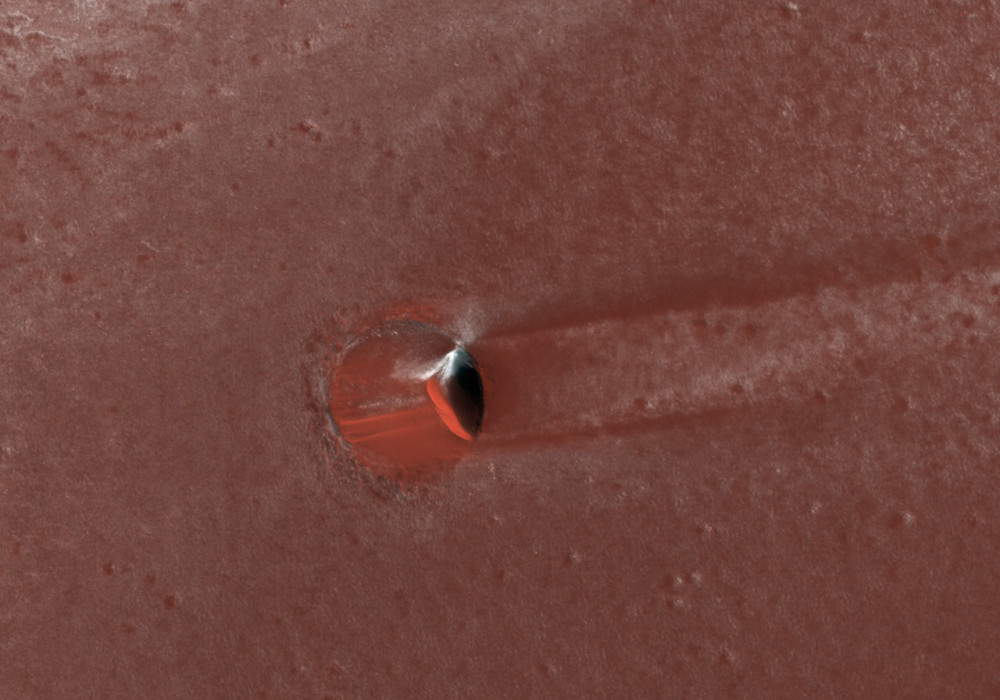