Lava Flow Oozing into a Crater

This image captures a fairly rare situation. In general, as lava flows along, it fills in low points and holes it encounters in its path and flows around high points such as hills and ridges. In this image there are two lava flows interacting with an impact crater.

Although an impact crater approximately 3 kilometers (1.8 miles) wide such as this is a deep hole in the ground (likely a couple hundred meters or several hundred feet deep), it is surrounded by a rim crest that is actually higher than the surrounding terrain, lifted up during the powerful impact that formed the crater originally. On the south side of the crater, a smooth-surfaced lava flow (with some knobs in the southwest) has come in contact with the exterior of the crater rim, burying any sign of ejecta from the crater and covering most of the rim, almost up to the rim crest.

However, because the height of the crater rim was slightly greater than the thickness of the lava flow, the crater rim acted like a wall and prevented the deep crater from being overrun and filled with the lava. Later, however, a different, younger, heavily ridged lava flow approached the crater from the north – the thickness of this ridged lava flow is visible along its flow front in the eastern part of the image. Unlike the earlier flow, the ridged flow overtopped the crater’s northeast rim, and a single lobe of lava is descending to the floor of the crater. If the rim had been any lower, or if the lava had advanced any further, the crater would have been filled and buried and we would not be lucky enough to see this snapshot of the dramatic interaction of lava with this crater.

By studying how lava reacts to obstacles and to variation in slope, like this lobe falling down the crater’s inside wall, scientists may be able to learn about the thickness, viscosity (or stickiness), and strength of the lava flow, which in turn could help constrain the composition and temperature of the lava. 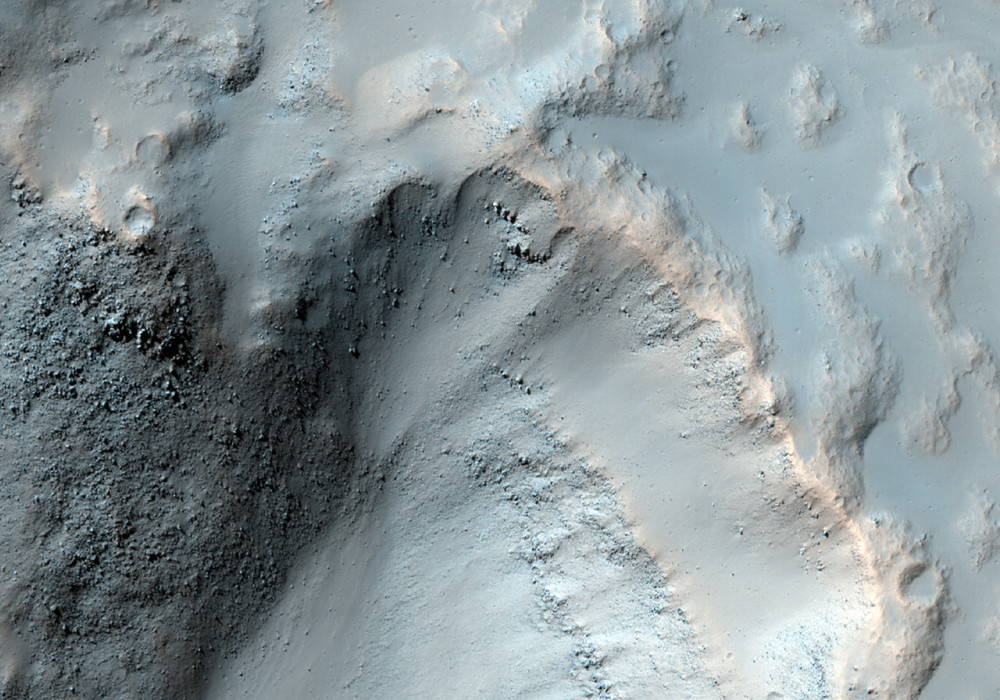