Lava Stratigraphy in the Flanks of Olympus Mons

This HiRISE image captures a small part of the giant scarp that marks the base of Olympus Mons, the largest volcano in the solar system. This scarp was most likely produced by massive landslides as the volcano falls apart under its own weight. Earlier images from the Mars Observer Camera on the Mars Global Surveyor spacecraft showed that there were layers in this area. HiRISE now reveals new details about them.

The layers consist of ledges of hard rock protruding out of the slope. This rock is fractured but not disrupted; such fractures are called joints by geologists. (If there were motion along them, then they would merit the name faults.) These joints are not as narrow or well-developed as in lava flows that we interpret to be water-cooled. It is not surprising that we do not find evidence for liquid water at this high elevation.

In most places the rock is covered by dust and mass wasting material. However, in the southern part of this image the stack of rocks (stratigraphy) is well-exposed. The rock between the hard ledges consists of broken up rock (breccia), with some blocks a few meters in diameter.

Overall, this pattern of hard rock encased in breccia is consistent with a type of lava called aa by Hawaiians and geologists. The solidifying surface of aa lavas are broken up as the flow moves, producing a carapace of debris surrounding the liquid lava. When the lava flow finally stops, the liquid interior freezes into a hard layer. The contraction during cooling produces irregular jointing like that seen in this HiRISE image.Written by: Laszlo P. Keszthelyi   (16 May 2008) 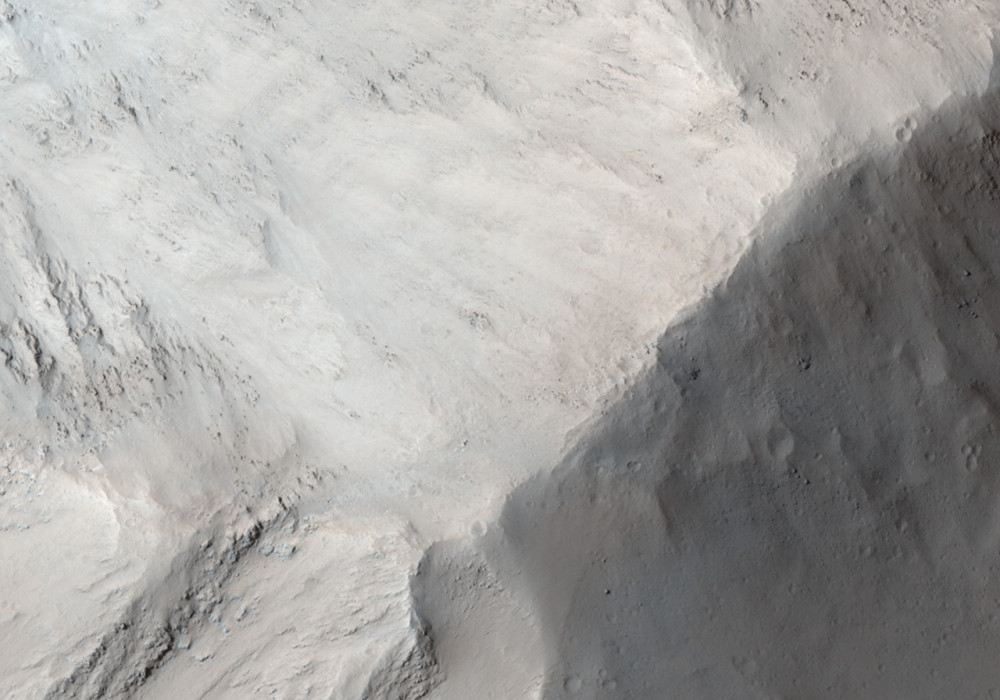