This image shows a small crater in the northwest part of Schiaparelli Crater, near the equator of Mars. The small crater (roughly 2 kilometers in diameter, similar to Meteor Crater in Arizona) was filled with light, layered sediments that are now exposed as bulls-eye rings within the crater.

Moving out from the crater center, the layers appear to be stair-stepped so that each layer is slightly lower than the previous one; the innermost layers are the youngest, deposited on top of a stack of sediments. The concentric pattern could be simply due to each layer being eroded slightly more than the one below it, but another factor may be the shape of the layers. If each layer draped over the interior of the crater and the region was eroded to a nearly flat surface, the layers would appear as a succession of rings. Topographic data of sufficient resolution would enable us to distinguish between these two models.

If the layers are draped, this provides some information about how they formed. Dust or volcanic ash settling from the atmosphere is likely to drape the surface; by contrast, deposits from rivers or lakes are likely to fill preferentially in the low areas.

In the RGB false-color image, much of the layered material appears pale. Some layers appear dark blue or red-brown in places; this may be due in part to trapping of wind-blown material in troughs or on rough surfaces. Ridges on the surface appear to protect it from erosion. These could be ripples of sand formed by wind and later hardened, or resistant fins called deformation bands created by rock deformation. 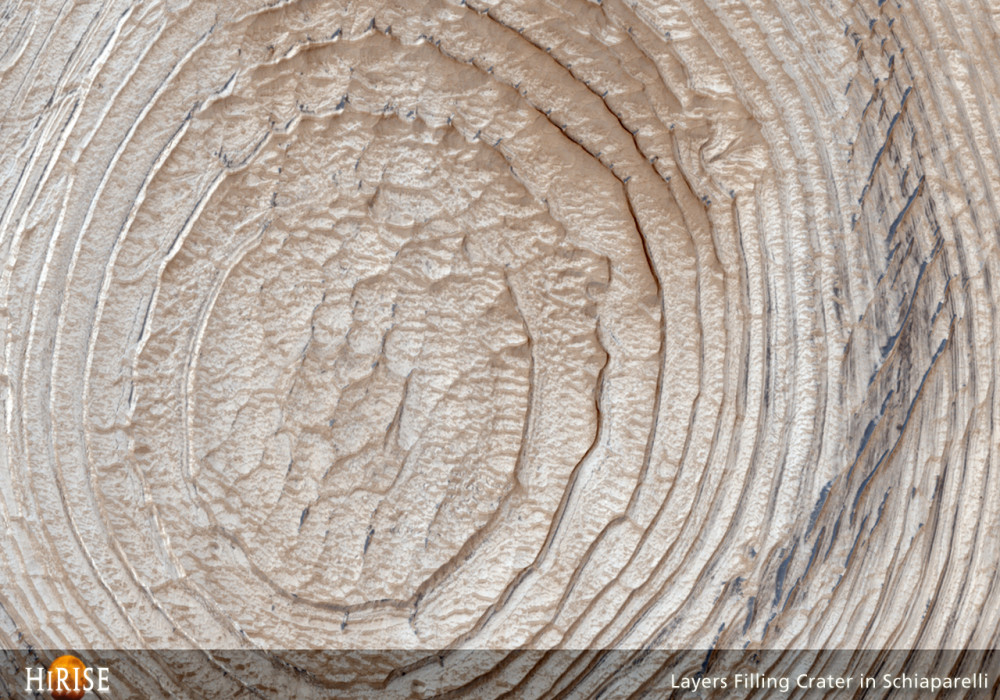