Valles Marineris is a system of tectonic depressions formed by down-dropping faults; the floors are among the lowest points on the surface of Mars, and may have once held lakes. Some sites show evidence for streams or rivers. The troughs may have also been sites of volcanic activity.

Currently, the deep floors contain massive deposits of bright sedimentary rocks. Some of the deposits are several kilometers thick, and have diverse composition and appearance. They were probably formed by many different processes in different environments.

At this site, most of the bright rocks exhibit a scalloped, patterned texture. This is thought to be associated with low-density deposits undergoing wind erosion, although the process is still not well-understood. Despite this relatively uniform texture, some variations are evident. The southern (upper) part of the deposit is relatively uniform, while the central portion appears to have thin layers.

On close inspection, the layers near the center of the image are all composed of the same material; they are probably visible due to slight topographic steps caused by variations in the strength of the rock. The layers have been highlighted by a mantle of dark, wind-blown sand ripples, which cover the flat parts of the stepped structure. At low resolution, this gives the appearance of alternating light and dark layers.

In the northernmost part of the image, the sediments have an entirely different texture, ranging from massive to fractured. These sediments also show evidence of layering.

Interpretation of these sediments is complicated by younger mantling materials. In addition to the sand ripples (some of which may have hardened to rock), a relatively massive dark layer appears to cap or drape the deposit in many places, including the southern part of this image. 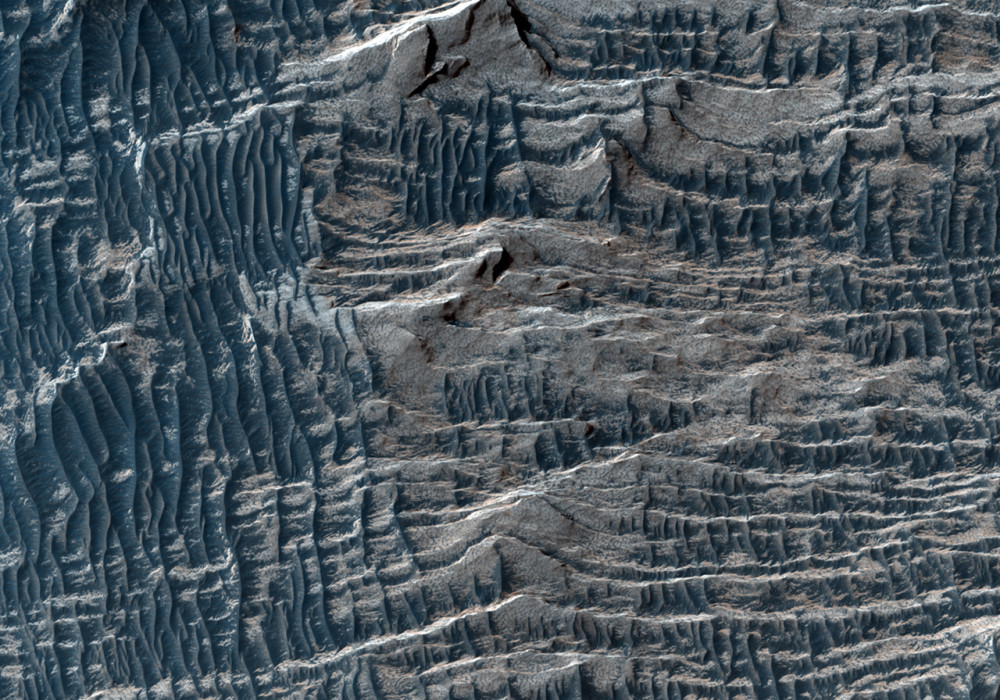