The troughs and chasms of the Valles Marineris system contain light toned deposits of enigmatic origin. The light materials, often layered, have variously been proposed to be volcanic ash or sediments laid down by rivers, lakes or sand dunes.

One aspect of the light toned material that has remained unclear is the timing of its deposition relative to canyon formation–was the material deposited in the troughs, or does it crop out in the walls, indicating that it existed before the Valles Marineris system formed?

This HiRISE image shows a part of the wall of Ganges Chasma. (This image, taken during the major dust storms which have raged through the summer of 2007, is grainy and low-contrast because of dust in the atmosphere). The plateau above the chasm is at the bottom of the image, with the wall of the trough descending to the north. A few fine layers, likely basalt flows, form the cap layers.

In the spur at the center of the image, light material appears to crop out, contrasting with the relatively dark material elsewhere in the wall of the trough. At least some of this material is inherently lighter than other wall rock; changes in tone occur at several sites where there are no breaks in slope. The light material appears be forming spurs and ridges similar to the surrounding rock, suggesting that it comprises at least some part of the walls. However, darker, bouldery material occurs at the same level just to the west (left) of the light patch, indicating that the light outcrop may not extend very far.

Images like this provide clues to help unravel the history of deposition and deformation in Valles Marineris, and may eventually tell a complex story. In order to fully understand what this image means, several questions must be addressed: is this light material the same as intensively layered deposits observed elsewhere? How extensive are light wall materials? Are these materials conformable (part of a continuous sequence) with the rest of the wall? More HiRISE imaging will help address these questions. Written by: Colin Dundas   (17 November 2010) 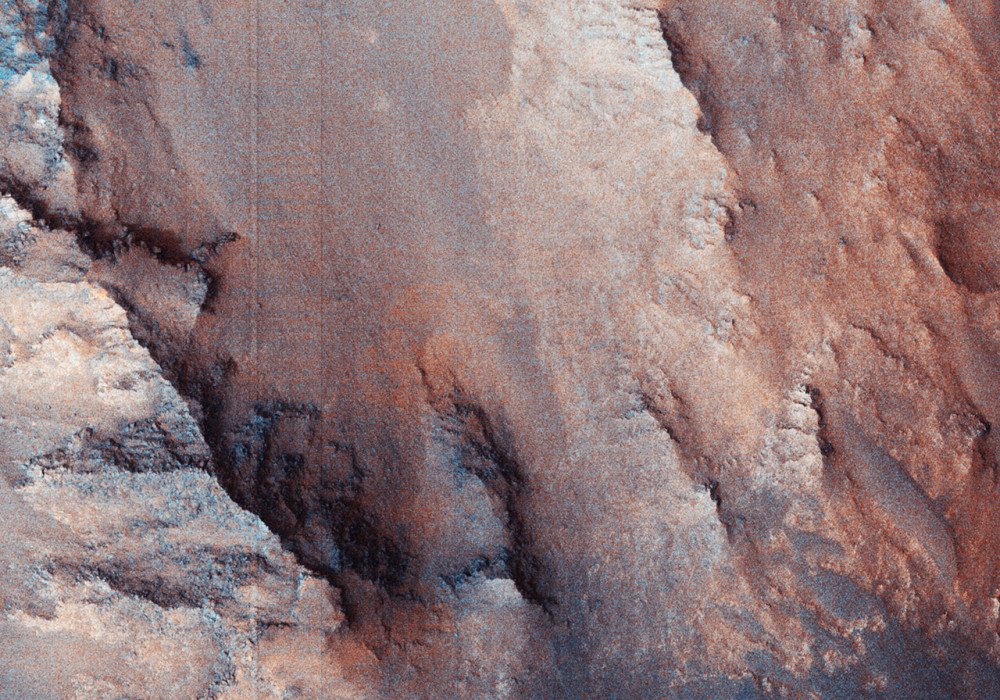