This image shows an outcrop of light-toned rock in Eos Chaos, a knobby region which transitions into the Eos Chasma. The outcrop is exposed in the wall of a mesa (a flat-topped, steep-sided plateau).

The outcrop is prominent in the eastern part of the image. Most of the material is light and shows many small scarps or benches. In places these appear to indicate boundaries between layers, but they are often discontinuous. The light material is buried by a thin mantle of dark material in places; the dark material is from other rock layers—possibly those above the outcrop&mdashand; has fallen or been blown over the light rock.

Near the top of the outcrop, there is a distinctive layer that appears as a dark band at low resolution. At the full resolution of HiRISE, this appears to be a layer breaking up into angular boulders, indicating different rock properties than the underlying light rock. There does appear to be some light material above this layer, suggesting that the process that deposited the light material continued for some time.

Ultimately, the mesa is capped by a thin veneer of dark material with a rippled texture, forming most of the southern part of the image. These ripples likely formed by wind blowing sand or dust, but they may have become indurated (hardened) enough to become inactive, since they are not found within small craters on the mesa top.

The light deposits could have formed by a variety of processes. Proposed deposition mechanisms for light-toned sediments on Mars include those from rivers or lakes, volcanic ash or wind-blown sand or dust. The dark boulder-rich band is also of uncertain origin, but it is likely harder rock, more resistant to erosion.Written by: Colin Dundas   (22 February 2008) 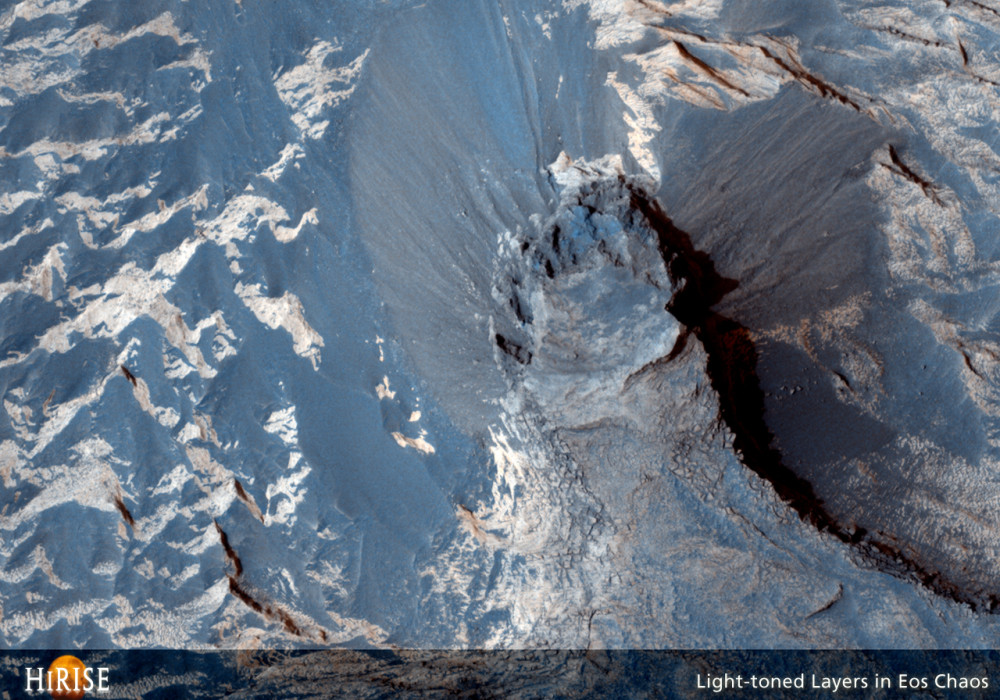