This image shows lineated valley fill and lobate debris aprons in the Deuteronilus Mensae region. Deuteronilus Mensae is located on the northern edge of Arabia Terra and borders the high-standing, heavily-cratered southern hemisphere and the low, uncratered plains that cover most of the northern hemisphere of Mars. The region is characterized by hills and mesas surrounded by debris slopes and broad valleys.

Many of the valley floors in the Dueteronilus Mensae region exhibit complex alignments of small ridges and pits often called “lineated valley fill.” The cause of the small-scale texture is not well understood, but may result from patterns in ice-rich soils or ice loss due to sublimation (ice changing into water vapor). The linear alignment may be caused by downhill movement of ice-rich soil or by glacial flow. For example, flowing ice on Earth typically develops wrinkles or ridges and pits due to stresses in the ice as it moves. The result is flow patterns, called “stream lines” that follow the valleys and curve around obstacles. In this image, stream lines are diverted or curve around the mesas.

The mesas in this image are also surrounded by aprons of debris that appear to have flowed away from the mesa. Recent results from the SHAllow RADar ( SHARAD ) instrument, another instrument onboard the Mars Reconnaissance Orbiter, indicate that lobate debris aprons in Deuteronilus Mensae, similar to those visible here, are composed of material dominated by ice [Plaut et al., 2008] and are interpreted to be potential debris-covered glaciers or rock glaciers. The debris aprons in this image appear to lie on top of the lineated valley fill and are therefore probably younger deposits. 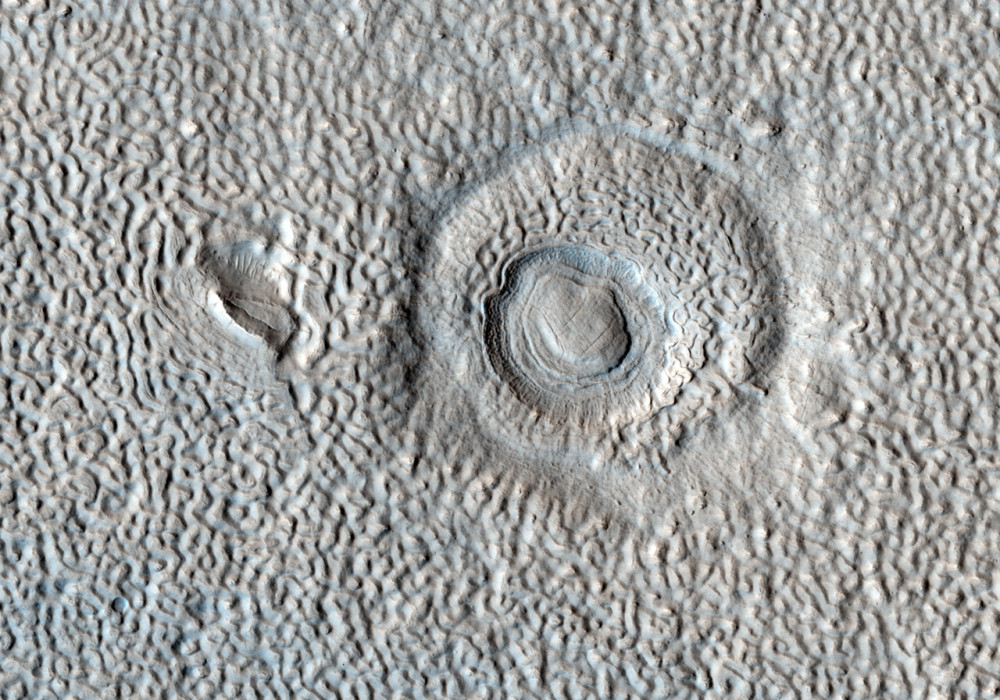