Looking for Changes in Dust Drifts West of Alba Mons

This image was intended to search for surface changes after three Mars years in a dust-covered region west of the Alba Mons volcano. It was acquired at almost the exact same season as another image in 2007, and the illumination and viewing angles are very similar.

The earlier image showed thick dust deposits accumulated downwind of topographic obstacles, apparently formed by winds blowing across the surface. These deposits, nicknamed “whiskers,” are evidently rare on Mars, so far found in only a few places such as the summit of Tharsis and on the flanks of the giant volcanoes. Their ages and origins are still poorly known. We expected that wind-related changes could be taking place here in particular because of the location’s low elevation in comparison to similar dust deposits elsewhere on Mars. The atmosphere is denser at this elevation, near Martian “sea-level,” than at the tops of the giant volcanoes, so the winds are more effective at eroding and transporting sediment.

A comparison of the new image with the image taken in 2007 shows no discernible differences in the dust deposits. Analysis of the full image is still ongoing, but it is already clear that no major surface changes took place in this location over the three Mars year interval between the two pictures. This is instructive because it tells us that the dust deposits are resistant to wind erosion (under normal winds at least; the last major global dust storm was in early 2007, before PSP_006271_2210 was taken) and that no new dust deposition has taken place.

This result suggests that either these deposits form and evolve very slowly, over time scales much longer than three years, or else they formed during a past period when the winds were much stronger than they are today. 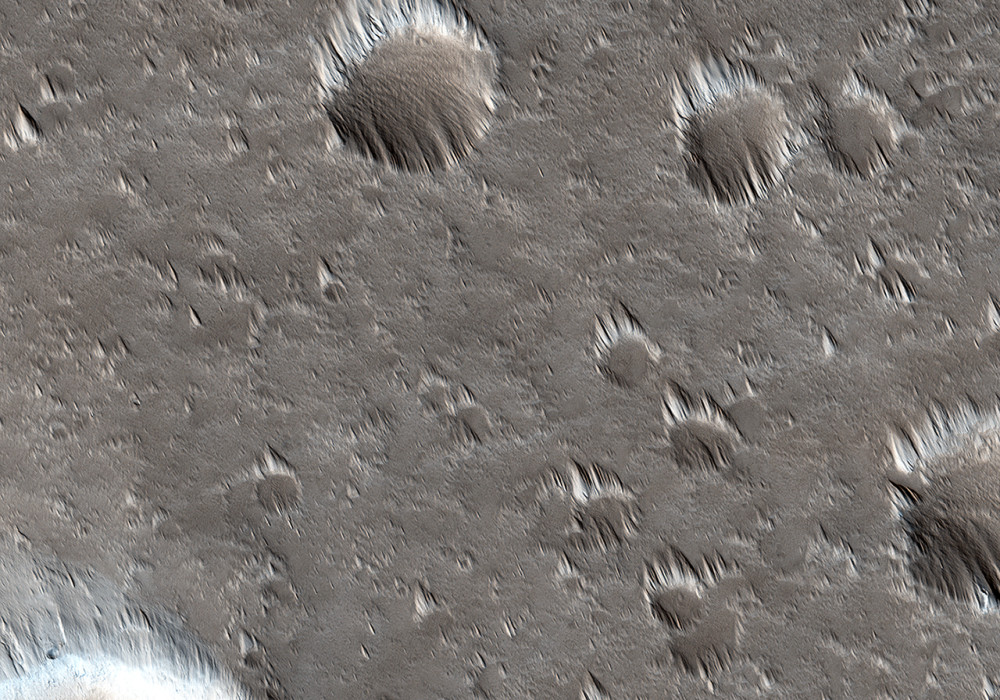