Lots of Layering in Becquerel Crater

Becquerel Crater is one of several impact craters in Arabia Terra that have light-toned layered deposits along the crater floor. The light-toned deposits are particularly striking to look at in this HiRISE image because they are stacked together to produce a thick sequence of layered beds. The layers appear to be only a few meters thick and show little variations in thickness.

On Earth, layered beds with these characteristics are typically formed in water environments, although aeolian (wind blown) deposition on Mars through a cyclic process is also possible. Volcanic eruptions would not be expected to produce ash or volcanic flows of such regular thickness, and there are no nearby volcanic vents.

Some of the layering in the image appears dark, probably due to deposition of basalt sand along flatter surfaces rather than any compositional variations in the layer beds themselves. Faults can also be seen displacing portions of the layered beds. The surface of the light-toned deposit is not smooth but instead appears disrupted into polygonal cracks and blocks.

Relative to most surfaces on Mars, there are almost no impact craters seen in this image. This is not due to a young age but rather to the friable (easily eroded) nature of the light-toned layered deposits that enable wind easily to erode the unit, thereby removing any impact craters. Evidence of erosion by the wind is most apparent in the bottom of the image where linear ridges most likely formed by wind scouring away material in a North-South direction and creating the ridges. 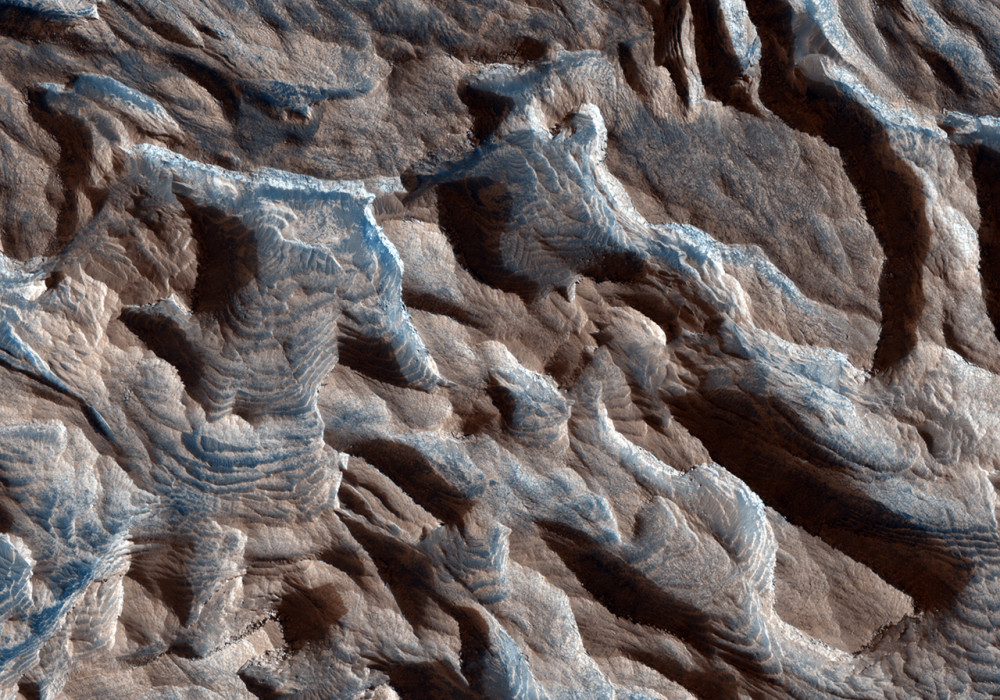