This image shows plains northwest of Juventae Chasma, one of the Martian canyons that are part of the equatorial Valles Marineris system. The two most noticeable features in this scene are craters on mesas (plateaus) and raised, winding ridges.

The raised ridges are inverted channels. It is likely that liquid water, either pure or salt water, flowed through these channels. The channels are raised because streams transport sediment as they flow, deposit the heavier sediment on the stream floor, and, eventually fill in once their water supply dwindles. Over time, wind erosion modifies a landscape, and this has played an important role on these plains. It eroded the land around the channels leaving the remnant channels exposed and standing high. The channels did not erode as much since they were more resistant, possibly because the deposited sediment had cemented together.

The craters on mesas are also evidence of active wind erosion. When craters form, they eject material out onto the surrounding landscape. It appears that several of the craters ejecta visible here cemented, making the ejecta more resistant to erosion and leaving them standing high as craters on plateaus.

The subimage (approximately 1120 meters across) shows a juncture of two of the inverted channels. It is likely that the water flowed from the left to the right of the scene, because channels usually join rather than divert unless there is an obvious obstacle in the way. No such obstacle is seen here, but one might have been present when the stream originally flowed. However, there is no way of knowing this.Written by: Kelly Kolb   (29 October 2007) 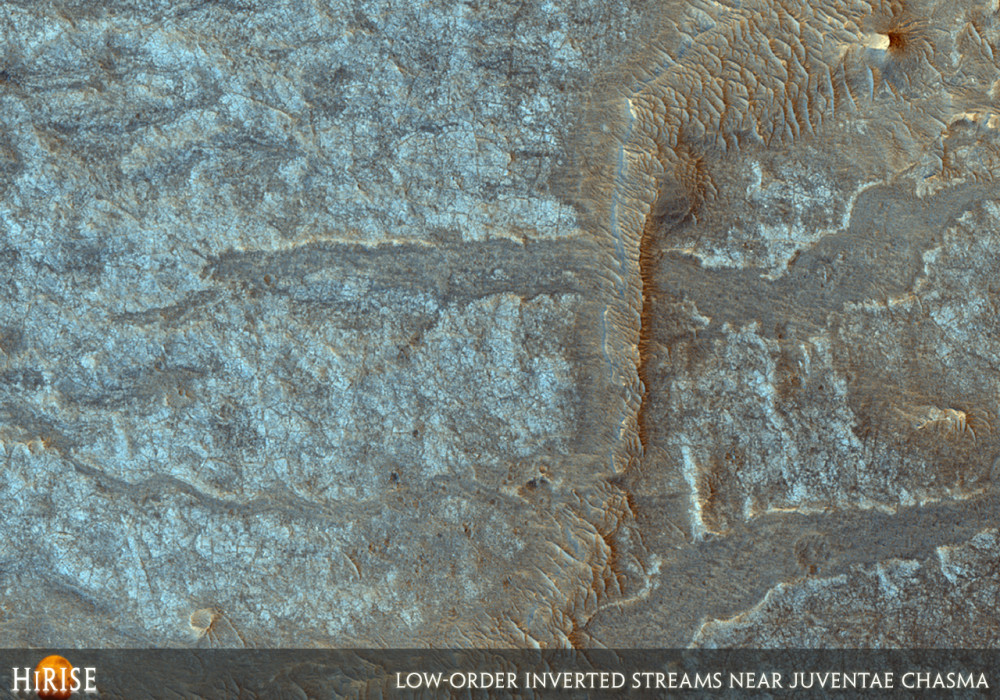