This observation shows a portion of the central uplift structure in Mojave Crater.

Central uplifts are a typical feature of large impact craters on the Earth, the Moon and Mars; craters larger than 6 or 7 kilometers in diameter on Mars typically form this mountain-like peak in the central portion of the crater interior.

This peak consists of rocks originating from several kilometers beneath the pre-impact surface. Mojave has a very prominent central uplift as it has a diameter of 60 kilometers (37 miles). In this image, boulders as large as 15 meters (50 feet) across have been eroded from the massive uplifted rock and have rolled downslope. Fine-grained debris has also collected in the topographic lows, and has been shaped by the wind into dunes and ripples.

Notably absent from this image are the striking drainage channels and alluvial fans that are abundant on the wall-terraces and ejecta of Mojave Crater (see PSP_001415_1875 ). These features were likely formed by surface runoff of liquid water, which may have been released from the subsurface during the impact event that formed Mojave.

Previously, it had been suggested that a brief, torrential downpour over Mojave Crater delivered the water. However, Mars Orbiter Camera’s (MOC) images of Mojave’s central uplift have previously shown no evidence for surface runoff, and the higher resolution of this HiRISE image confirms that this part of the crater appears untouched by liquid water.

So the question remains: by what means was the water, in the form of runoff, supplied to Mojave? This question, in addition to several others regarding this phenomenon, are currently being investigated by the HiRISE team and their collaborators.

The full HiRISE image shows that the crater floor south of the central uplift is densely pitted and fractured. These pits, many of which are partially filled with dark sand, lack raised rims and a circular form. This suggests that they are not impact craters. In fact, very few definite impact craters are seen on the floor and walls of Mojave, implying that it is incredibly young and relatively well preserved for a crater of its size. 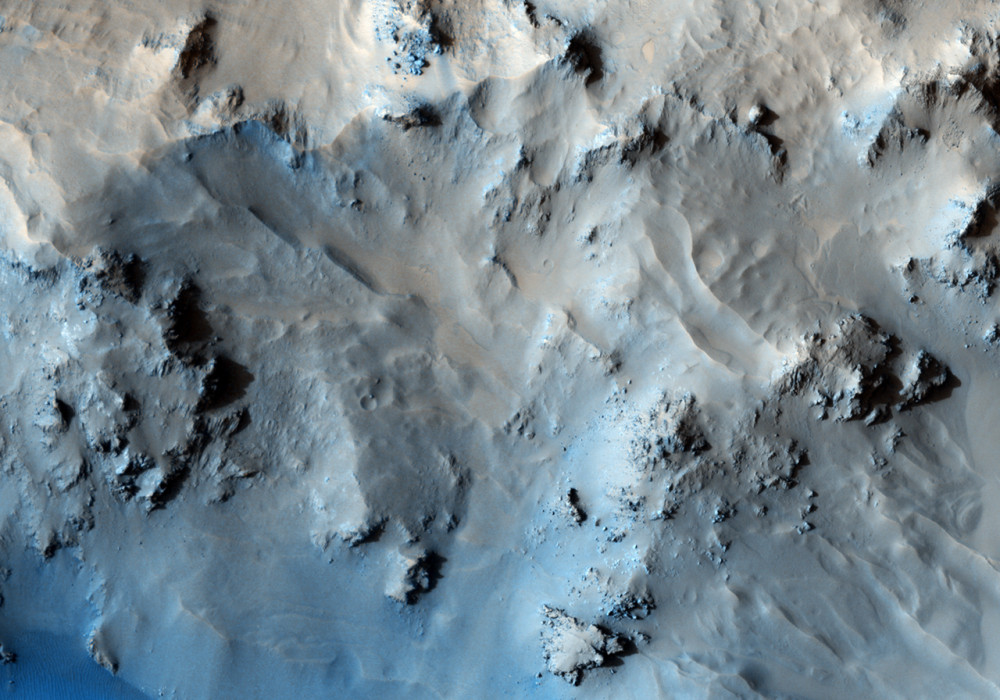