This image is taken in one of the troughs that are typical within the stack of Martian south polar layered deposits.

Faint criss-crossing troughs and dimples can be discerned on even the smoothest surfaces. Perhaps the most notable features in the image are the distinct round to heart-shaped to blob-shaped depressions scattered throughout the smooth areas, dubbed “swiss-cheese terrain.”

The smooth material is solid carbon dioxide ice representing the uppermost layer of the south polar residual cap. The retention of carbon dioxide ice throughout the year by the southern polar cap is one characteristic that distinguishes it significantly from Mars’ north polar cap. The swiss-cheese depressions are areas in which sublimation of the carbon dioxide ice was initiated at a particular location and spread laterally from that point, creating rounded depressions typically several to 10 meters deep.

In HiRISE images, it is evident that this carbon dioxide-rich material is actually comprised of several individual horizontal layers. In this particular location, several images had been acquired over the previous decade by the Mars Orbiter Camera (MOC) at slightly lower resolutions. In a series of those MOC images, the swiss-cheese depressions were seen to enlarge radially, or grow over a time period of several years.

Part of the HiRISE imaging campaign includes continued monitoring of these features (at higher resolution) to understand their growth rates and patterns. In turn, we can better comprehend the role of carbon dioxide—the main component of the Mars atmosphere—in the current Mars climate regime. 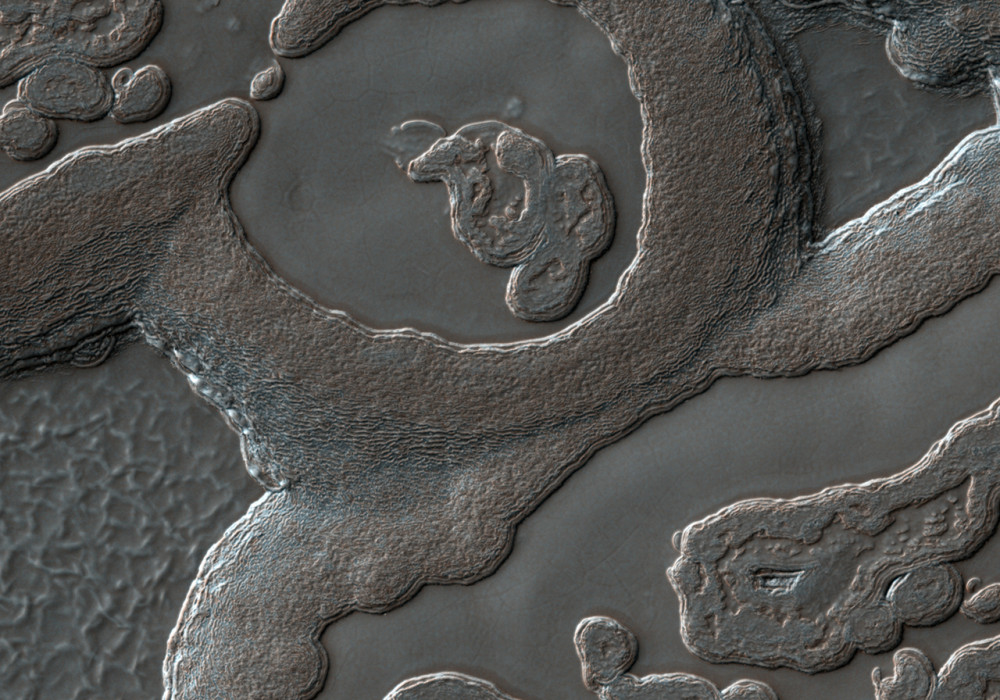