This impact crater is only about 5.5 meters (18 feet) across – tiny compared to the giant basins that scar most planetary bodies. This type of bowl-shaped crater is called a simple crater. It’s “simple” compared to larger craters that have terraces, central peaks and rings, and other, more complex, shapes.

Why should we care about such a small, plain crater? One reason is that it’s extremely young. The large craters we see on Mars are millions to several billion years old, but this crater formed between January 2006 and May 2008. That means it was only a few months to a few years old when HiRISE observed it. We know this because we have been studying Mars with multiple missions over a long time period, and we can compare images of the same area and detect changes. In this case, the Context camera on the Mars Reconnaissance Orbiter took an image that had a dark spot in it. (To see the dark spot in the CTX image, look near the middle of this image , to the left of the central group of little hills.) When this was compared to a previous image from the THEMIS instrument , the dark spot wasn’t there. Therefore, we know it must have formed between the dates those two images were taken.

The Context camera has a lower resolution than HiRISE, in order to cover more area. A single pixel is about the same size as this crater. So that Context image can’t resolve the crater; all that’s visible is a dark spot. When HiRISE followed up on the detection and returned this more detailed image, we could see that the dark spot is actually a much larger area surrounding this tiny crater. The dark area that allows us to detect these new impacts is probably the result of lighter-colored dust being blown off the surface by the impact event.

At this site, there are also some streaks of dark material that was ejected out of the ground. Using this higher resolution image, we can positively identify a new crater at the center of the dark spot. 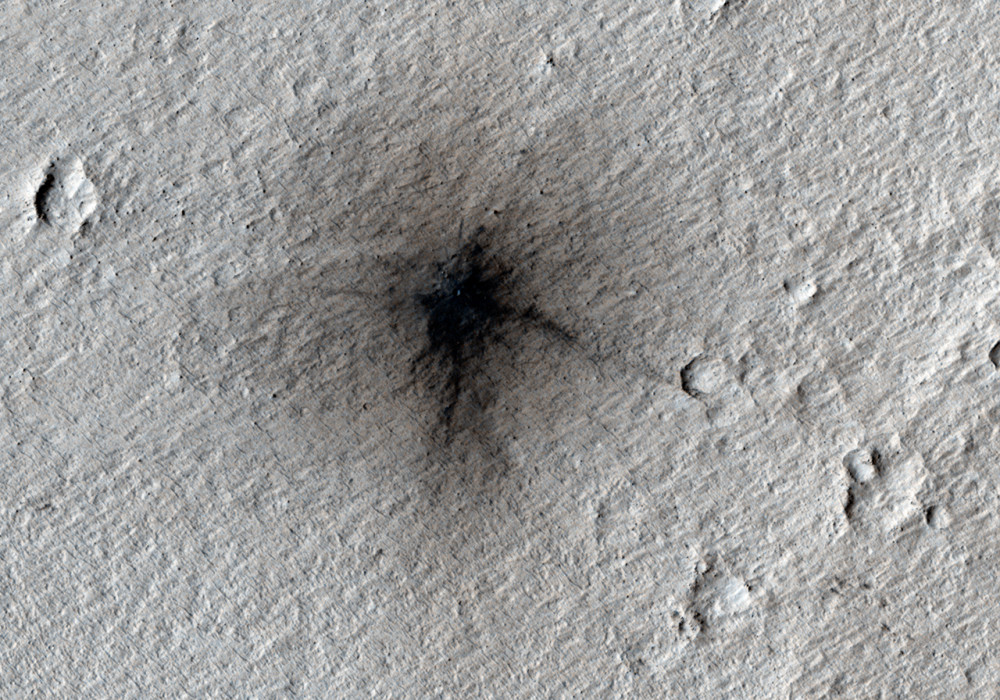