Opal Deposits near the Valles Marineris

The compositional diversity of Mars was poorly known until a fleet of missions began mapping the surface with thermal and near-infrared spectrometers a dozen years ago.

CRISM on MRO is the latest of these instruments and targeted this particular region because exotic minerals had been detected nearby. Both sulfates and hydrated silica have been identified in this area by their near-infrared spectral signatures. The minerals were discovered near the rim of the giant Valles Marineris canyon system, in light toned layered deposits thought to be Hesperian in age (around 3 billion years old). The sulfates are spectrally similar to jarosite, a potassium iron sulphate hydroxide. The silica appears to lack a clear crystal structure and is thought to be made up of amorphous opal, which can contain up to 20 percent water.

If these interpretations are correct, the mineral assemblage suggests precipitation of the minerals from low temperature acidic fluids or formation by low temperature aqueous alteration of basalt. HiRISE images of light toned layered deposits elsewhere near the Valles Marineris show inverted channels and other morphological indications that the sediments were once saturated with water.

This HiRISE image gives some clues to how the minerals are expressed on the surface. The banded bedrock is visible beneath a partial cover of much younger dunes. Bright, relatively white bands can be seen to alternate with slightly redder layers. These bright bands could be concentrations of opal. The darker bands might correspond to concentrations of brown jarosite. The minerals may have segregated because of gradients in the temperature or acidity of the fluid.

These Martian deposits are not likely to be made up of pure opal of gemstone quality. However, opals and cherts on Earth are well known to preserve fossils and other biological evidence. Even a small sample of one of the bright bands in this scene would be priceless. 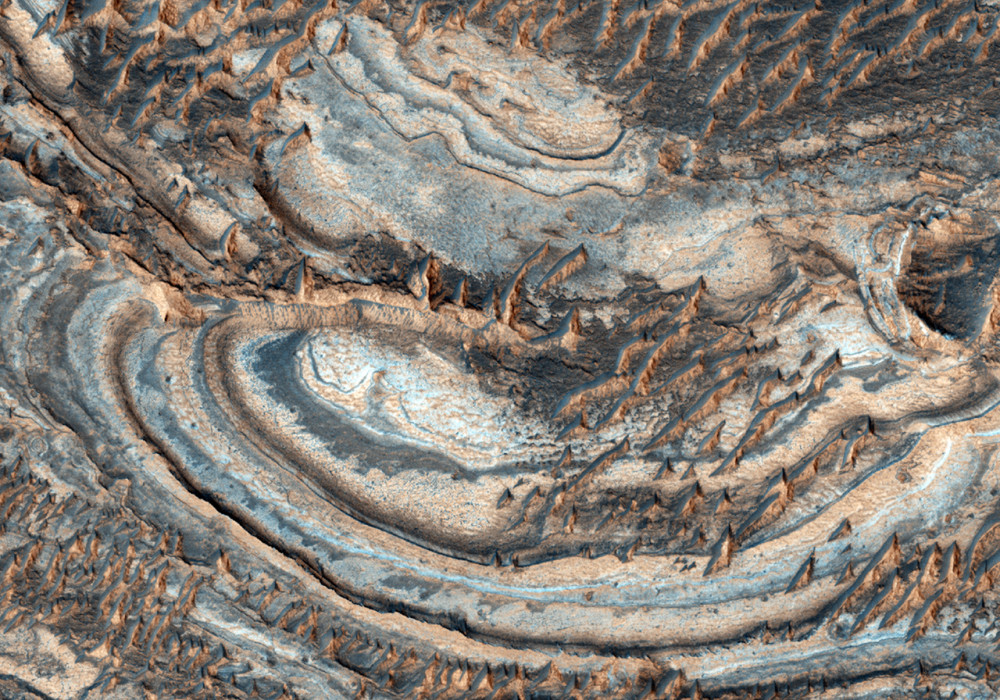