Outcrops of Layers in the South Polar Layered Deposits

This image spans a section of the south polar layered deposits (SPLD). The SPLD are composed of layers of water ice mixed with impurities (probably mostly dust). The most similar terrestrial analog to the SPLD are ice sheets, like those covering most of Greenland and Antarctica.

The materials of ice sheets are deposited by freezing of atmospheric water vapor on dust particles and precipitation of those water/dust particles (snow), by direct condensation (freezing) of atmospheric water vapor onto the surface, and by fallout of dust. Together, these processes cause an ice sheet to undergo accumulation (build-up). Ablation (removal of material, also called erosion) of an ice sheet can also occur. If more accumulation happens than ablation, the ice sheet grows; if reversed, the ice sheet shrinks, as is the case for many of Earths glaciers due to global warming. Each year, the amount of accumulation and ablation varies, so layers of different thicknesses and different amounts of impurities (dust) will be deposited onto the ice sheet.

Volcanic eruptions anywhere on the planet can also potentially spew ash high into the atmosphere, where it can travel great distances and fall onto an ice sheet surface. Later accumulations of water ice can then trap this volcanic ash as a layer within the ice sheet. Thus, layers in an ice sheet can originate through a variety of means and occur at a variety of scales (thicknesses).

This particular image is interesting because many layers are exposed and because more than one outcrop (exposure of layering) is visible—at the top of the image and at the bottom. You can imagine the outcrops at the top and bottom of the image as if you are looking down on a staircase. The approximately horizontal lines are the edges of the layers (the risers), and the flat areas between them are the layer surfaces (the flat parts of the steps). The middle of the image is the top of the staircase. At the bottom, the staircase of layers goes down again.

The layers in this image are on the scale of meters (several to tens of feet) in thickness and are much thicker than one might expect from annual accumulation (which might be about 0.5 millimeters per year, or 0.02 inch per year). So the layers we see in this image may be packages of thinner, annual layers. The reason that we can distinguish between different packages of annual layers (in other words, the reason that we can see layering at this scale) is because the rates of accumulation and ablation change not only yearly, but also on much longer time scales. Imagine drilling into the SPLD and looking at the walls of the hole with a microscope. Within the large-scale layering we see in this image, we might see annual accumulation layers, dusty layers created during large dust storms, and maybe even volcanic ash layers. 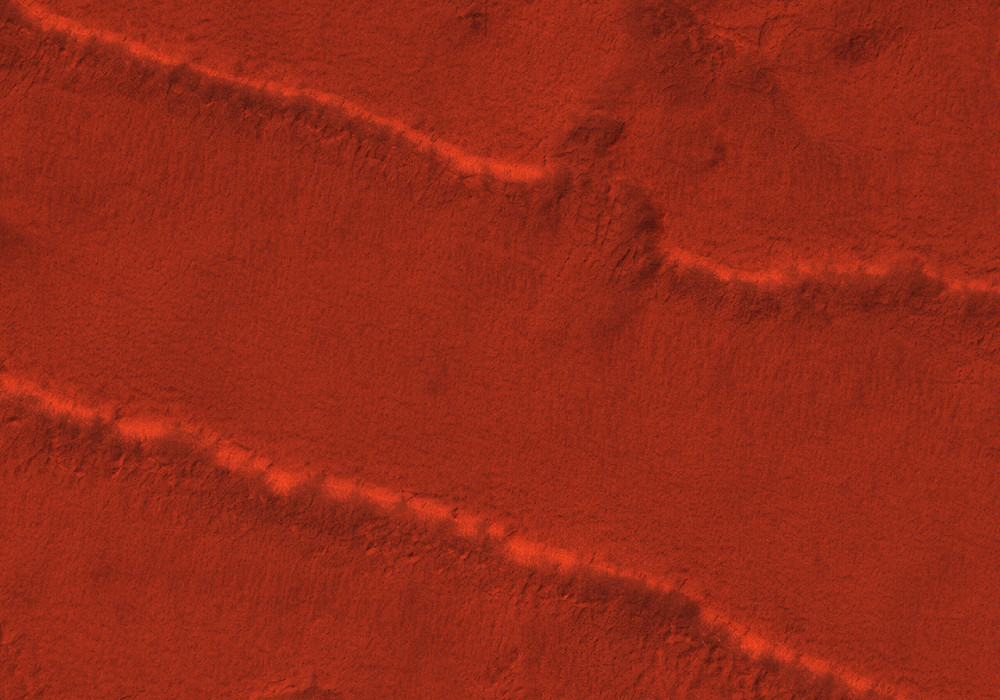