This close-up image gives the impression of looking like bacterial cells and their internal structures which travel and split in the process of life. These features are fractal in nature: the same image is preserved through different scales, with the pattern repeating eternally.

The reality is, we are looking at one of Mars’ polar regions; the South Polar residual cap to be precise, and, as with many things in Martian planetary science, there is a precise reasoning behind the name. With the coming and going of the seasons, this is an area on Mars where ice remains even after the peak of summer arrives.

The texture is very alien, bearing more of a resemblance to the universe of the very small, rather than the universe far, far away. But if this is a polar cap, then why does it not look like the polar caps on Earth? Indeed, there is no equivalent terrain observed here on Earth.

The so-called “Swiss cheese terrain,” referencing the numerous holes of the region, is a product of seasonal exchange between the surface and the Martian atmosphere. With a predominantly carbon dioxide content at 98 percent, the colder temperatures condense the gas out of the atmosphere to produce dry ice. The prevalence of water is more concentrated in the north, leaving the South polar region more carbon dioxide rich, and it’s this difference in composition that generates the unusual texture of the Swiss cheese terrain.

The Red Planet is one of the chief candidates in the search for life elsewhere in the Solar System; however, a quick glance at this image virtually gives the impression we have already found it.

NB: The cutout image has been rotated so that north is approximately up. 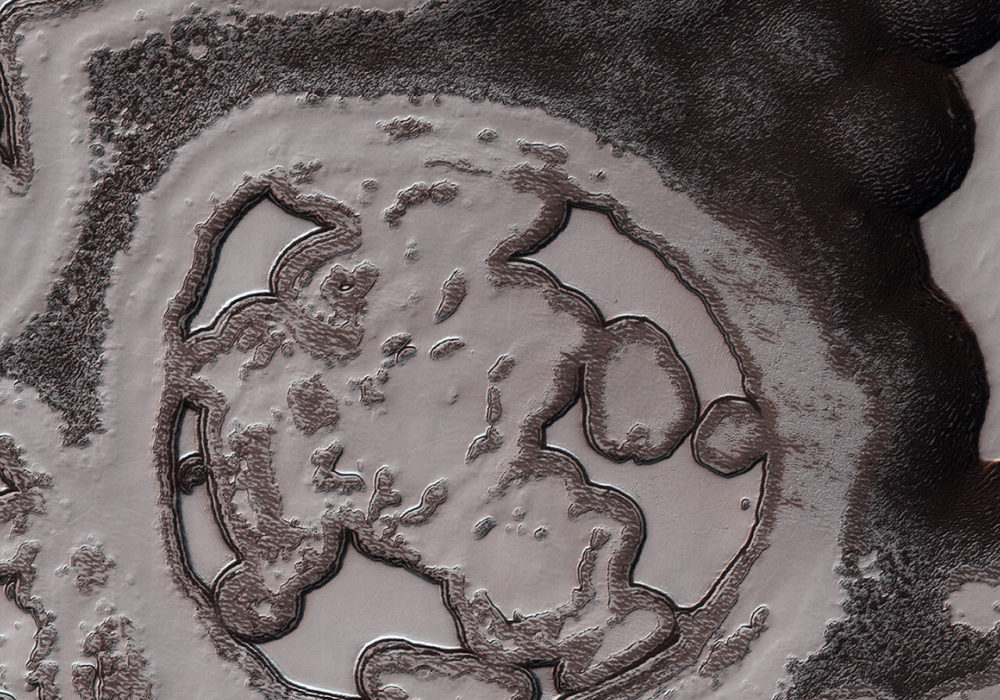