This image was taken of an area on the lower southeastern flank of the volcano Elysium Mons. In the center is a small, dark pristine-appearing pit approximately 130 meters in diameter, which is clearly visible among the numerous small impact craters that are heavily covered by dust and sediment. These pit craters are usually appear in the younger Tharsis volcanic region, but this is one of the first seen in the older Elysium volcanic region.

Garden variety craters are excavated by impacts and are characterized by raised rims, sloped walls and surrounded by ejecta blankets, but pit craters are simply sink holes in the ground with near vertical walls and floors that are only visible when the sun is high in the sky. They are deep holes that may lead to underground caves in volcanic terrain. This isolated pit crater is located in a lava field that is crisscrossed by long, linear troughs.

A commonly invoked hypothesis to explain these troughs is that they are collapsed lava tubes, essentially tunnels formed by underground rivers of lava. Lava tube collapse may begin with the buckling of its roof at one location where the roof is thinnest. At this point, light enters into the permanent darkness of the cave from above, forming a skylight. Pits or skylights are distinct from impact craters: they appear as dark, roughly circular shadowed holes because of their steep walls, while the shadows cast by impact craters generally shade only a portion of the crater floor, because the slopes of the walls are shallower. When this picture was taken, sunlight directly lit part of the floor of this pit crater, illuminating the large boulders (see close up image) on its southeastern slope.

The first skylights were discovered in 2007 on Mars, and in 2009 on the Moon. The famous Devil’s Throat is Hawaii is a good Earth-example: it’s 50 meters wide and accessible by foot. Pit craters provide a window into the subsurface structure of Mars, and prior to collapse, might have also provided potential habitats where organisms could be protected from the harsh, sterilizing UV radiation experienced at the surface. 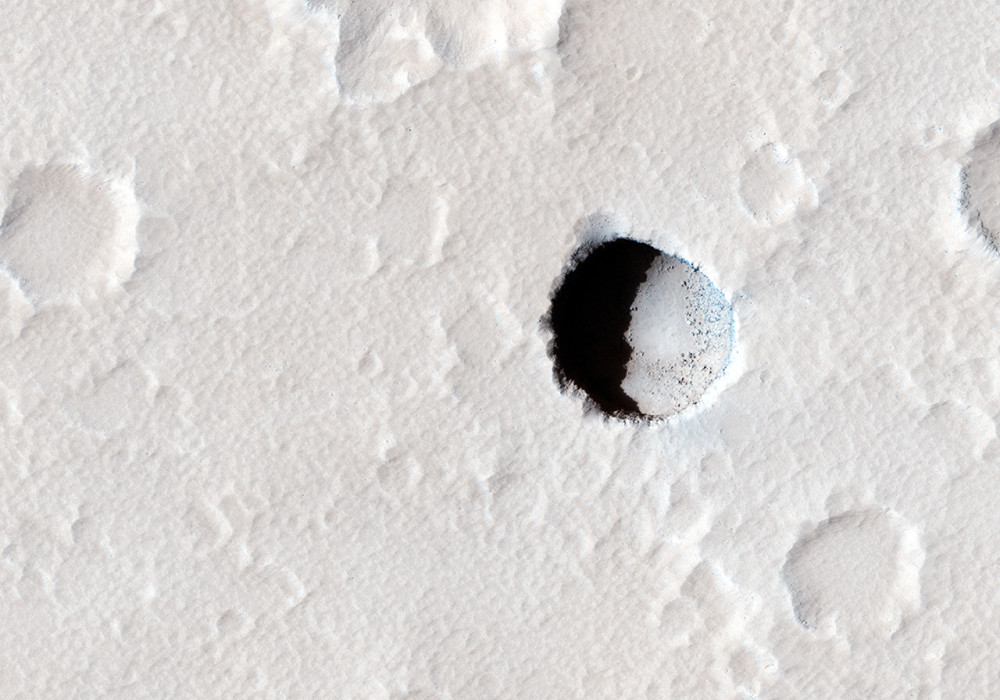