This image is of a portion of the Southern plains region within Hellas, the largest impact basin on Mars, with a diameter of about 2300 kilometers (1400 miles).

There are three main phenomena apparent in this image . First, the faint dark streaks that criss-cross the terrain are dust devil tracks that clear the bright dust along their way. Second, the subtle overall bumpy “basketball” texture of the surface is formed by repeated seasonal freezing and thawing of the ice-rich regolith and is common at higher latitudes. Third, the large, elliptical, scalloped depressions are common in permafrost terrains in both hemispheres, where thick, latitude-dependent sedimentary mantles comprise the surface units.

These mantles are composed of ice-rich sediments that degrade as the ice sublimates away and is heated either by the Sun or by locally higher geothermal gradients. Sublimation, or the direct change in phase from ice to gas, occurs on Mars because of its low density atmosphere. These depressions have steeper pole-facing slopes, whereas the equator-facing slopes gently fade into the surrounding terrain. At full resolution ( see close up view ), numerous sublimation pits and networks of polygonal cracks are visible on the steeper, unstable pole-ward facing slopes.

The overall morphology of this terrain is characteristic of what is called “thermokarstic degradation processes,” which is a term used to describe the formation of pits in an ice-rich terrain due to loss of ice creating pits and collapse features. 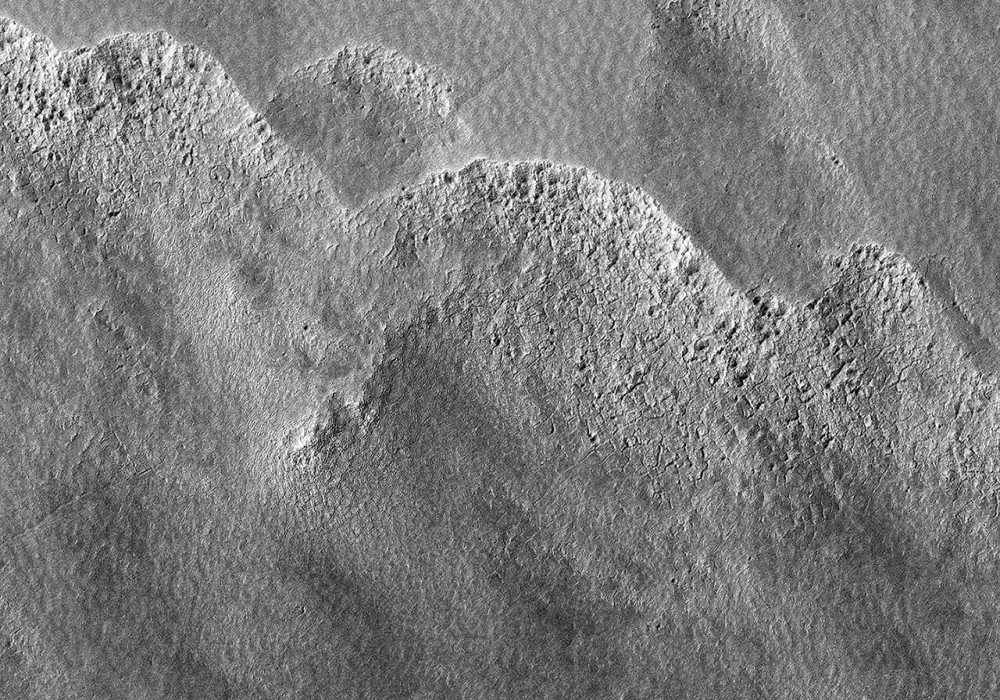