Like Earth, Mars has concentrations of water ice at both poles. Because Mars is so much colder, however, the seasonal ice that gets deposited at high latitudes in the winter and is removed in the spring (generally analogous to winter-time snow on Earth) is actually carbon-dioxide ice. Around the South Pole there are areas of this carbon dioxide ice that do not disappear every spring, but rather survive winter after winter. This persistent carbon-dioxide ice is called the “South Polar residual cap.”

The white portions of this observation are part of that residual ice cap, and the sunlight is coming from roughly the bottom of this non-map projected image. It is made of solid, frozen carbon dioxide and is very bright relative to the background. This is despite the background terrain having a very high water-ice content, which is darkened by very fine rocky particles, or dust.

Very interesting and picturesque in this scene are the different scales of polygons present in each terrain. The relatively medium-toned lines in the dark terrain divide it into polygons that are up to approximately 10 to 15 meters (30 to 45 feet) wide. Typically, temperature changes of the ground over the seasons cause it to expand and contract, forming cracks and troughs between sections of ground that may partially fill with frost, forming the polygonal pattern viewed from above.

The polygons in the bright carbon dioxide terrain are different. First, they are much larger, up to 20 to 40 meters (60 to125 feet) wide. Second, they are (in most cases) traced out by thin ridges rather than narrow troughs. In rare cases there appears to be a trough where a ridge might be expected, attesting to the complicated patterns that develop in a type of ice that doesn’t occur naturally on Earth (meaning, solid carbon dioxide) under conditions that are greatly different from our planet: very cold and very low pressure. 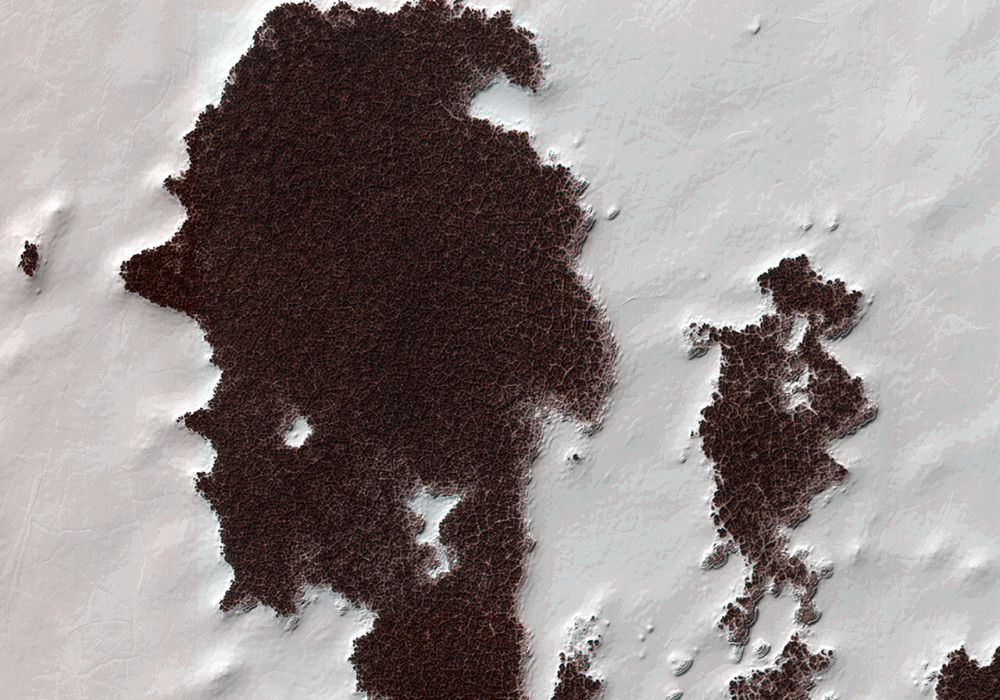