If you want to get a better look at the crater floor, check out this CTX image and this really neat anaglyph. From this you can see that the lava covered almost the entire crater floor, however the crater central peak sticks up from the center, an island in the sea of lava.

This observation was taken to study the channel and breach to learn about the properties of the lava when the flow was active a long time ago. Since part of the science rationale for taking this observation was to find the relative heights of the ponded lava surface and the surrounding plains as well as to measure the depth of the channel, this site was chosen for stereo coverage . In this case the target was imaged a second time 3.5 years (almost 2 Mars years) after the first image was acquired.

Sometimes when the two parts of a stereo pair are taken far apart in time, the stereo pair turns into an inadvertent change detection pair. So did anything in this landscape change in the intervening 3.5 years? Yes! And it has nothing to do with the old lava flow (the reason the observation was taken).

If you look closely at the crater wall, you can see streaks going down the slope in many different areas. These are slope streaks which are thought to form from dust avalanches that remove a thin layer of bright dust from the surface (see PSP_005369_1925 for a more thorough explanation). Now going back to the stereo pair, this subimage shows two cutouts of the same part of the crater wall, but in the later image (the one on the right) we can see that an entirely new slope streak formed in the time between the acquisition of the first and second image! The new slope streak is approximately 725 meters (roughly 0.45 miles) long. This is merely one example of a new slope streak.

If you look closely, you should be able to identify many slope streaks that have formed in this small area since this observation was originally acquired. 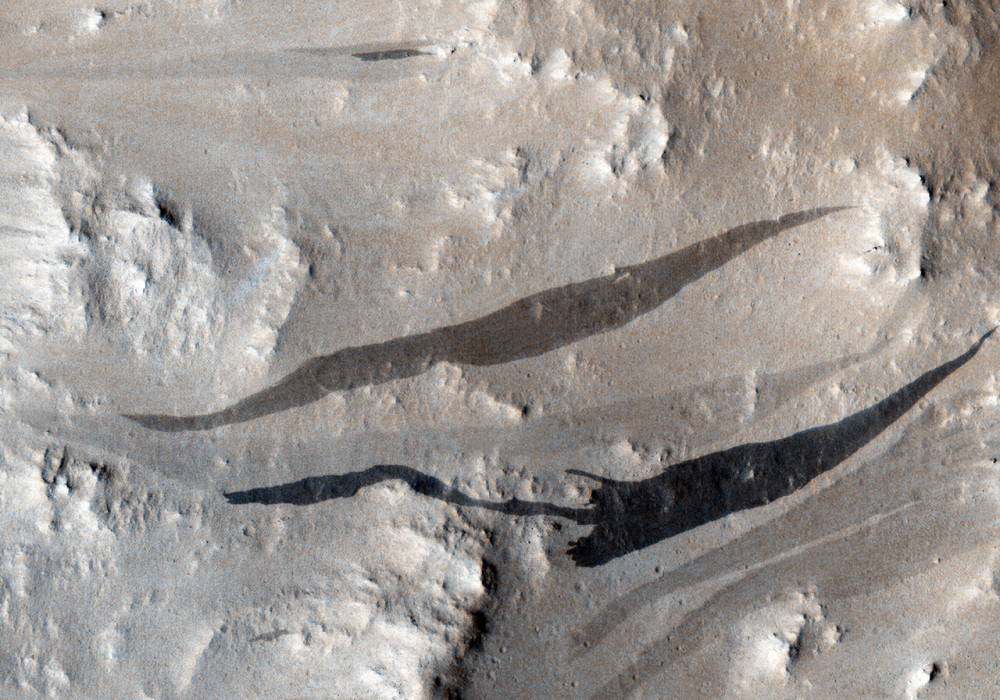