A variety of diverse morphological features are present in this image (21 by 5.5 kilometers) located in the southeastern area of the Nili Fossae region and just northeast of Syrtis Major.

This particular region has been studied intensely due to the presence of volcanics from Syrtis Major and impact ejecta from the Isidis Basin. The region is rich in unaltered mafic deposits, in contact with diverse altered deposits rich in clays, carbonates, and sulfates. These deposits make the Nili Fossae region one of the most colorful regions on Mars, which is most distinctive in infrared color composites (IRB). HiRISE IRB color aids in chemical and mineral-type mapping, especially when correlated with other MRO instruments such as CRISM.

In this infrared color close-up image (2.6 by 1.2 kilometers), we can see a mesa, along with aeolian dunes and yellow-colored deposits. A mesa is a flat, steep-sloped hill, which was likely eroded by a combination of wind-driven and landslide processes. These are often formed due to differing rock compositions, which vary in their resistance to erosion, e.g., a weaker and softer rock, such as sediments, lies beneath a stronger and more resistant rock. The flat top surfaces of mesas, termed the “cap” rock, are relatively erosion-resistant rock types, such as igneous lavas or intrusive sills. The looser, yellowish deposits that underlie the cap rock contrast nicely with the purplish-blue cap rock.

Another closeup (0.7 by 1.2 kilometer) shows an area just north of the mesa that is particularly distinct in this IRB color. Based on a corresponding CRISM image providing spectral data, there is some exposed bedrock in the area that likely contains salt-bearing rocks. 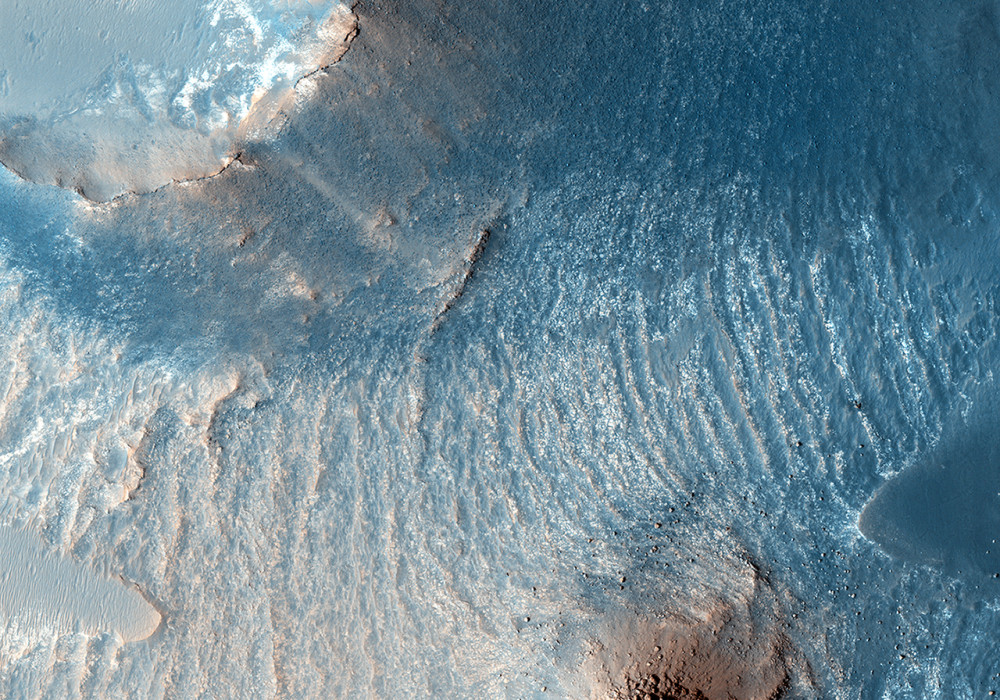