This image shows wind-eroded layered deposits in Aeolis Mensae, located close to the volcanic region of Elysium and near the boundary of the high-standing, heavily cratered southern hemisphere and the low, sparsely-cratered plains that cover most of the northern hemisphere of Mars.

Aeolis Mensae is well-known for its unusual features commonly related to wind activity on the planet’s surface. Several long, sinuous, and branching ridges have been exposed by wind erosion. Raised curvilinear ridges observed in this region, such as those shown here, are believed to be former stream channels now preserved in inverted relief.

On Earth, inverted relief occurs when formerly low-lying areas become elevated because the original depression is filled with materials, such as lava, that are more resistant to erosion than the surrounding terrain. In the case of stream channels, the stream bed may contain larger rocks and/or sediments that have been cemented by chemicals precipitating from flowing water, which remain while adjacent fine material is blown away by the wind. In this location, it is most likely that water once flowed through this channel and deposited sediments that eventually filled the channel and became cemented. Over time, wind eroded the surrounding surface leaving the remnant channels exposed as raised curvilinear ridges.

Surrounding the inverted channels are several shorter, linear, streamlined ridges oriented roughly south/north. These are yardangs or streamlined remnants of material shaped by the action of sand-blown sediments that eroded away weaker material. The orientation of the yardangs indicates the primary wind direction. Landforms such as these are common in desert areas on Earth. Portions of the larger curvilinear ridges appear to be eroding into yardangs. 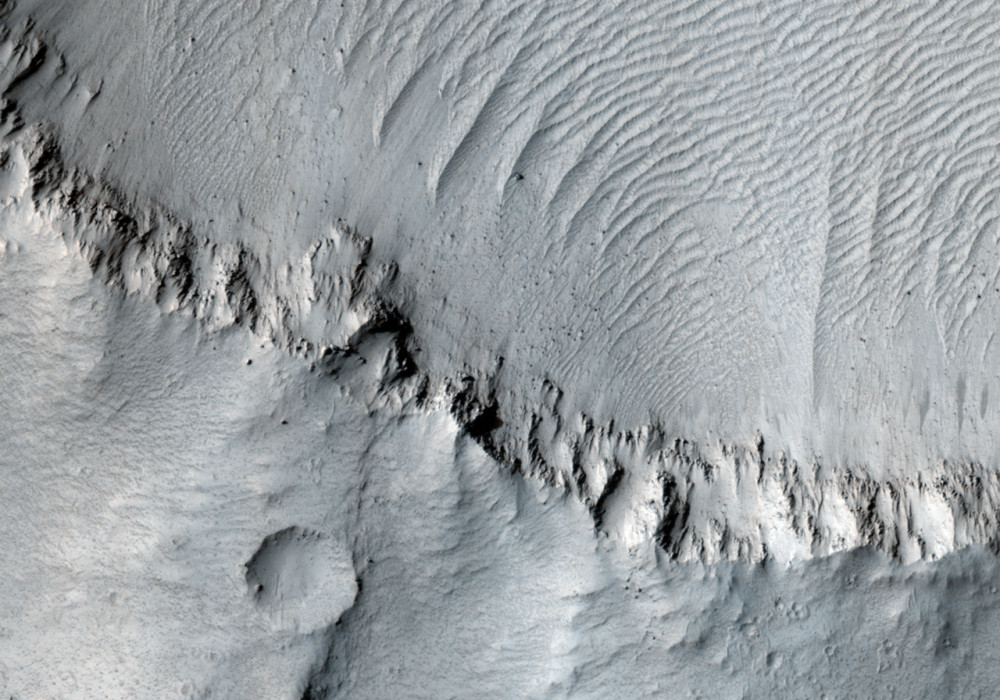