This image shows a prominent “rayed” crater in the Elysium Planitia region, the second largest volcanic province on Mars.

Rayed craters have distinct lines of ejecta emanating in all directions from their centers, creating a star-like pattern. Originally it was thought that these craters were only present on the Moon, Mercury, and some of the moons of Jupiter and Saturn, and therefore were only created on surfaces that lacked an atmosphere.

This view changed when the THEMIS camera began to image the surface of Mars and rayed craters started to become apparent in the infrared spectrum. The rays themselves are usually made up of both impact ejecta and, in the case of the larger craters, the clustering of secondary craters.

The patterns in the ground in which the crater was emplaced are composed of slightly raised sinuous ridges. These may be pressure ridges and could be the result of the expansion of cooling flood lavas prevalent in the area. Although the surface is presently covered with a light-toned dusty material, the underlying, dark presumably basaltic material is exposed in the larger craters.

This particular crater is close enough to another even larger rayed crater known as Zunil to actually be one of its secondary craters. Secondary craters generally have a shallower bottom and are often non-circular due to their lower impact velocity and angle of impact. This crater appears nearly circular with ejecta and large boulders that are visible near the crater rim and within the crater itself.

A slightly darker rayed ejecta pattern surrounds the crater and is probably composed of finer-grained material transported farther away during impact formation. The center of the crater appears to be shallower than would be expected from a higher energy primary impact event, but an elevation model would be needed to accurately measure the crater’s depth to width ratio and use scaling laws to decide whether or not its a primary or secondary crater. 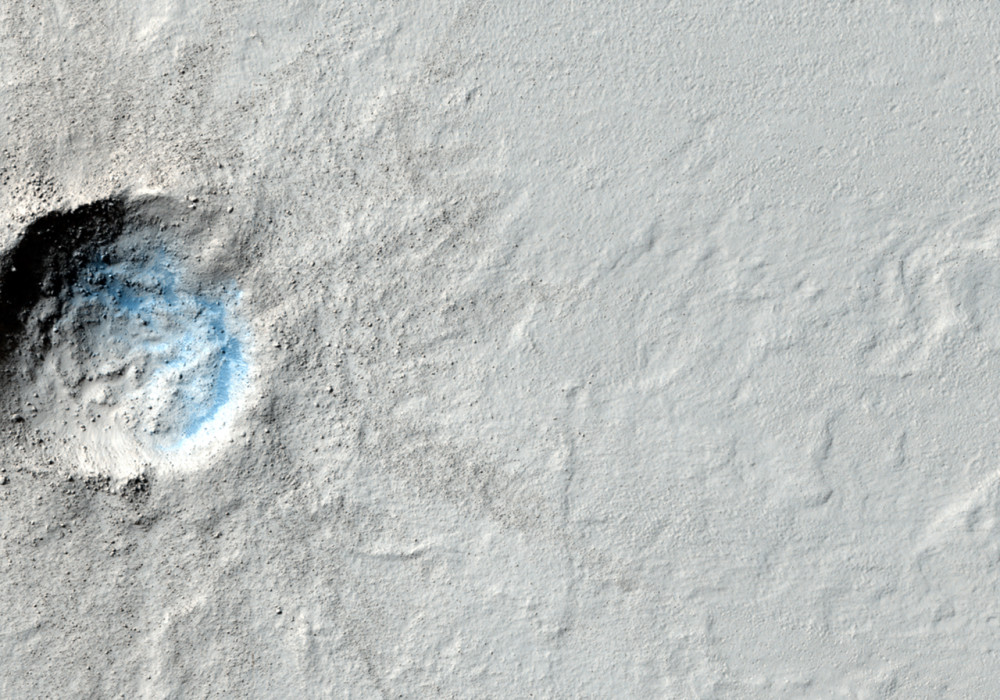