Ridge and Talus in Lycus Sulci

This image nicely captures several influential geologic processes that have shaped the landscape of Lycus Sulci.

Our observation covers an area of about 7.5 by 5.4 kilometers in Lycus Sulci, located just to the northwest of Olympus Mons in the Tharsis region of Mars. “Sulci” is a Latin term meaning “furrow” or “groove.” In this case, Lycus Sulci is a region comprised of a series of depressions and ridges.

Like most of the Tharsis region, Lycus Sulci exhibits thick deposits of light-toned Martian dust; the slopes on ridges in this region feature abundant streaks . These streaks are long, thin dark-toned features. They appear when the superficial light-tone fine-grained materials (i.e., Martian dust) suddenly move down slope and expose the darker underlying volcanic surfaces. Repeat imaging shows that dust streaks are consistently dark when they are initially formed and become lighter over time. This is due to the steady deposition of dust from the atmosphere. Slope streaks are also visible along the slopes of ridges and shallow depressions.

Two ridges here exhibit partially exposed bedrock . These outcrops are interpreted to still have abundant coatings and dust, obscuring the underlying bedrock. This interpretation is based on the lack of bluish color for volcanic bedrock from the infrared-red-blue swath of our camera, and consistent with the homogenous tannish color we see throughout the same swath. It’s possible that the ridges here and throughout the Lycus Sulci region formed via volcanic and tectonic processes, which have been further sculpted by wind erosion and other mass wasting processes. For example, talus slopes, which appear as fine-grained fans or conical-shaped deposits, originate from the steepest portions of the ridges. These form when the rocks or deposits on the steepest slopes of a ridge fail under the influence of Martian gravity and their own mass, causing an avalanche of these materials, which then accumulate downslope. 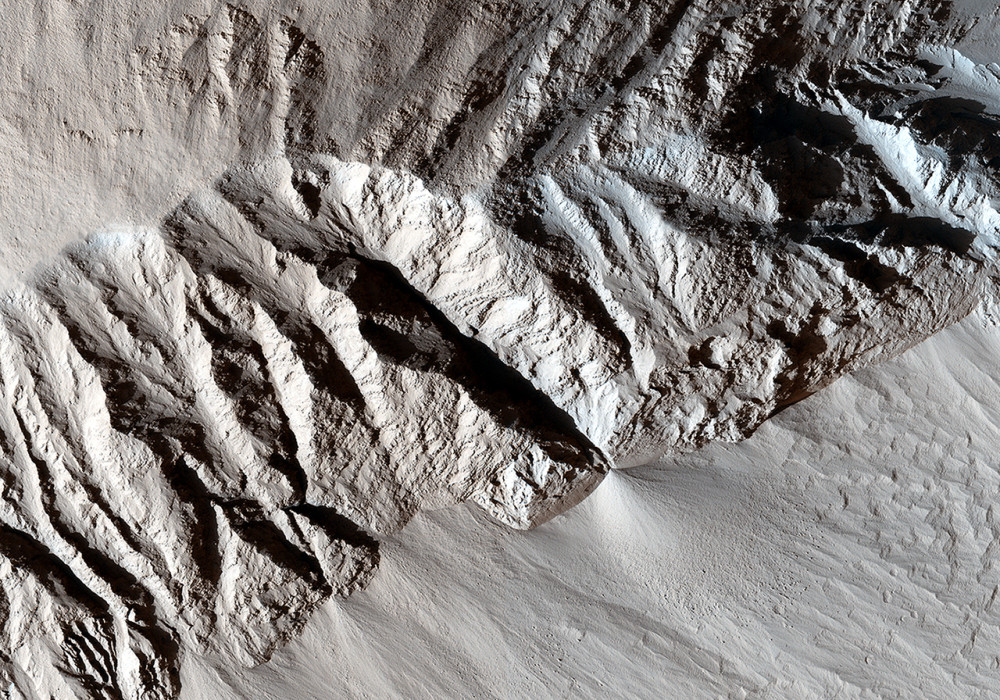