Sand and Rock in Meridiani Planum

This observation shows rock outcrops in Meridiani Planum, in the area of the landing site of the Mars Exploration Rover, Opportunity. The image is centered on a cluster of buttes, steep-sided erosional remnants protruding from a level plain. There are two broad categories of material in the image: light-toned sedimentary rock and dark-toned material, which is likely wind-blown sand.

The light-toned material was probably deposited as sediments transported by wind or water; Opportunity found outcrops of aeolian (wind-deposited) sandstone, and this may also be the case in the area of this image. The dark areas show ripples formed by material (probably grains of sand eroded from basaltic lava) blowing in the wind.

In the RGB enhanced-color image (which is not what the colors would like to the naked eye), the dark material is relatively blue, while the light rock ranges from pale blue to tan. The pale blue color in some cases may be due to small amounts of basaltic sand overlying relatively tan rock outcrops, but could also be a real difference due to varying composition or cementation of the rock.

The presence of buttes like those at the image center suggests rock layers of varying resistance. Relatively hard, resistant rock on top can armor a patch of weaker material below; this is commonly observed on Earth. Relations like this are found at many sites in the Colorado Plateau (the Four Corners area of the United States), which has been used as an analogue for this region on Mars. Written by: Colin Dundas   (15 December 2007) 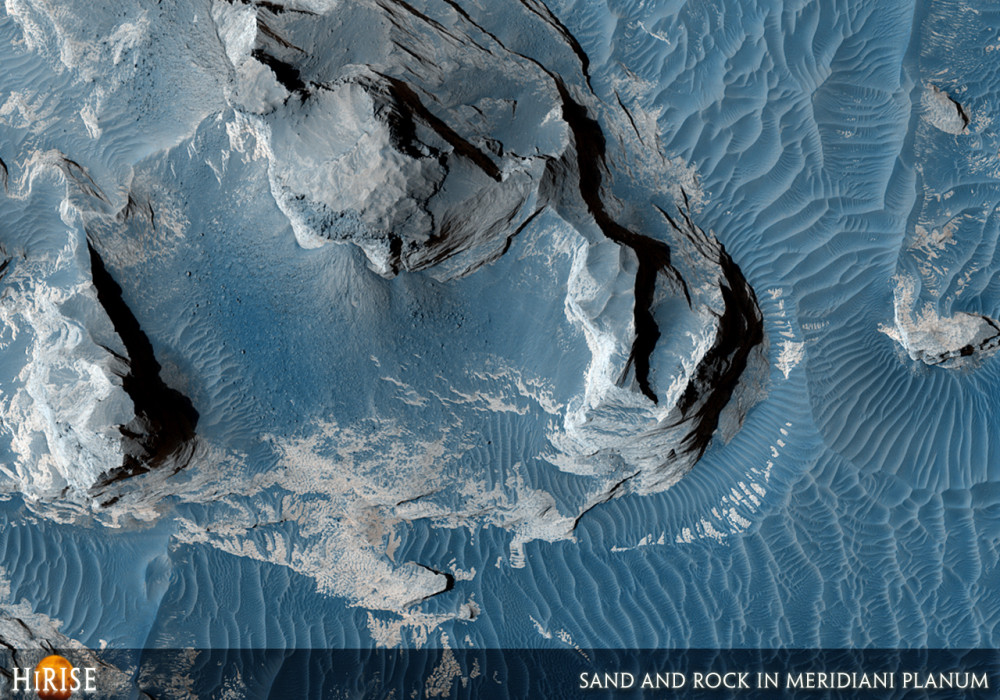