Landing of the surface of Mars requires extensive planning and imaging reconnaissance. This terrain west of Aeolis Planum is being considered as landing site for a future Mars mission.

The surface is relatively flat with numerous small-scale ridges and mounds. Some of these ridges curve and form the rims of old impact craters, now in various stages of erosion and largely filled with soil. However, most ridges have the appearance of a wind-driven landform called ripples. These features are about 10 yards wide and 100 yards long, and meander slightly but are generally oriented south to north.

Mounds are less distinct, but may also be aeolian (wind derived) in nature. Most of the “freshest” looking crater floors, those seeming least eroded, contain smaller characteristic sand ripples.

All of the craters appear eroded and heavily filled with a soil mantle. Even many of the ripples features appear mantled and smothered by soil. Nevertheless the occurrence of these aeolian bedforms (landforms that are formed by wind blown sand) suggest these surface soils are comprised of loose fine-grained regolith (rocks and fine rock fragments), which the wind has been able to move and organize.

Very few rocks or boulders are seen and those that are seen are largely limited to ejecta around some of the fresher appearing and larger craters. Although still heavily eroded and mantled, these rocky craters indicate more cohesive material such as bedrock or partially-cemented regolith exists beneath the loose soil cover. The absence of widely distributed rocks ejected from craters may suggest this area has experienced extensive, possibly ongoing, accumulation of soil, or that the subsurface rocks are weak and easily eroded by wind and windblown sand. 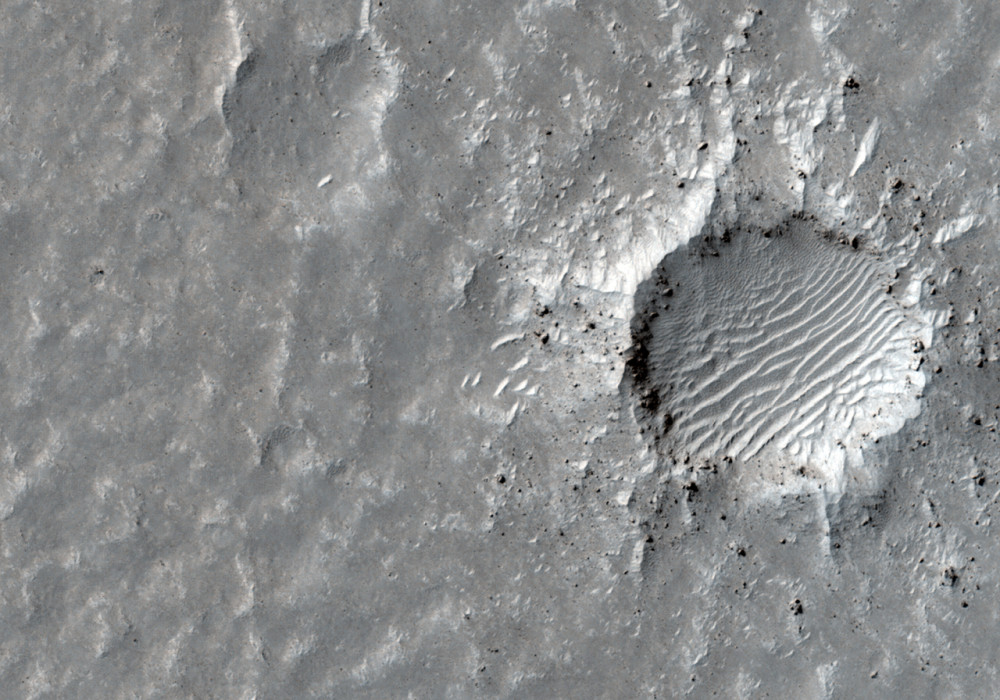