This image covers the eastern half of the 20.5 kilometer diameter Santa Fe impact crater. This moderately sized crater possesses a fluid-like ejecta blanket, which is typically referred to as layered ejecta.

The term layered ejecta is used because it is less suggestive then fluidized, which suggests that water is involved. There is an ongoing debate as to whether this type of ejecta is formed from ices or fluids in the target, may be a consequence of interactions between the ejecta and the atmosphere,or both.

Sante Fe Crater is located about 150 kilometer South of the Viking Lander 1 site in Chryse Planitia. Because this is a well-preserved impact crater, the high-resolution image here captures several important aspects of larger impact craters in general and large layered ejecta type craters in particular.

The crater is covered in this image from its central peak on the west edge of the image to almost the crater rim on the East side, and North and South onto the ejecta surface beyond the crater rim. The margins of the ejecta that are characteristic of this type of crater are not visible in this observation, but have been imaged by HiRISE ( ESP_012795_1995 ). Parallel ridges of outcrop on the inner slopes of the north and south crater wall are terraces of faulted wall rock common to large complex impact craters.

In the North and South quarter of the image, the surface of the ejecta beyond the crater is visible as a rolling and hilly terrain. Throughout the image, and particularly along the base of slopes and scarps there are numerous small ridges. These are dunes, much younger than- and unrelated to the formation of the crater.

Santa Fe Crater takes its name from Santa Fe, New Mexico. (The convention for naming craters on Mars states that some craters may be named after towns with populations smaller than 100,000.) During the Viking Landing site selection in 1976, early Viking Orbiter images were acquired of southern Chrsye Planitia near the outflow point of Kasei Vallis onto the Chryse plains. In honor of the 200th anniversary of the nation at that time, local craters near the landing site were named after towns important in the Nations founding. Santa Fe, was one of the first towns on the continent, so one of the craters was named after the town.

Interestingly, the town of Santa Fe, New Mexico lies just 40 kilometers East of another young 20 kilometer-diameter crater, except this one is not an impact crater, but rather a giant volcanic caldera, the Vallis Caldera. 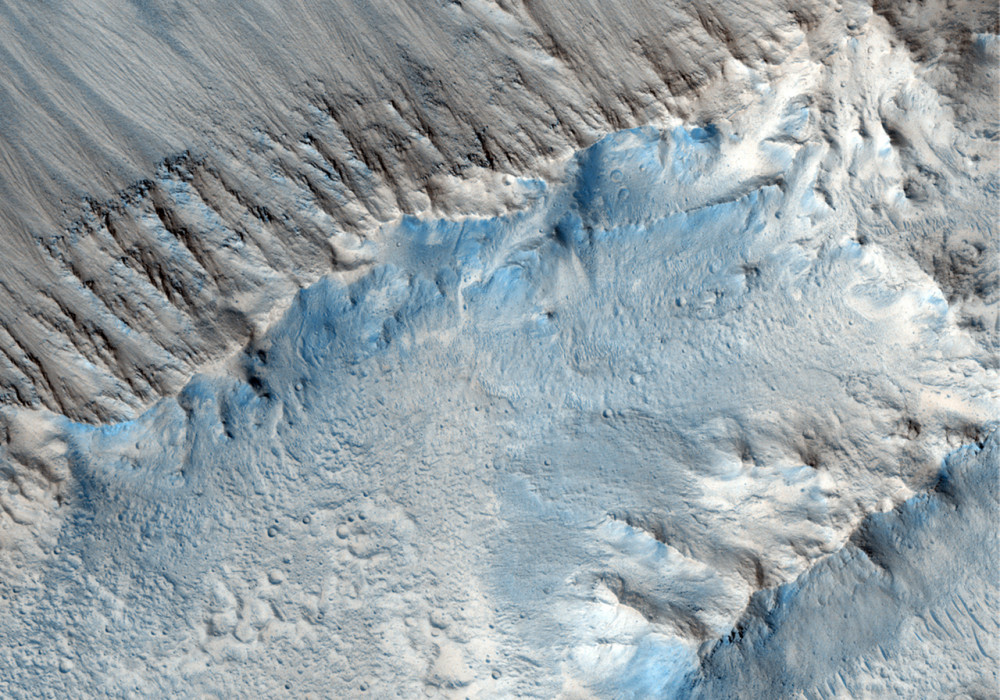