This region shown here is located on the northwest flanks of the volcano Peneus Patera, itself located in the southwest area of Hellas Basin.

It is covered by a layer of relatively smooth material, possibly made of ashes and dust mixed with interstitial ice. This layer covers a more ancient surface and partly buries craters up to tens of kilometers wide. The image shows residual parts of the layer. Erosion has exposed lower terrains with a rougher pitted texture.

Several areas are crossed by a network of cracks forming polygons. These features are similar to permafrost (permanently frozen) polygons that form in periglacial regions on Earth by seasonal-to-annual contraction of the subsoil. They are indicative of the presence of ground ice, so it is likely that the landforms we observe here are related to the presence of interstitial ice in the subsurface. (Periglacial means occurring or operating adjacent to the margin of a glacier.)

The erosional process of these terrains starts with the development of oval- to scalloped-shaped depressions that typically have a steep pole-facing scarp and a gentler equator-facing slope. Several of these depressions may coalesce together, leading to the formation of large areas of pitted terrain.

The texture of these terrains suggests that the main formation process is sublimation, which is the process of a material going directly from a solid state to a gaseous state. At this latitude on Mars, the conditions of pressure and temperature allow water ice within the ground to sublime. The disappearance of the ice component of the ground probably leads to the formation of depressions. This process may still be active today.Written by: Alexandra Lefort   (25 July 2007) 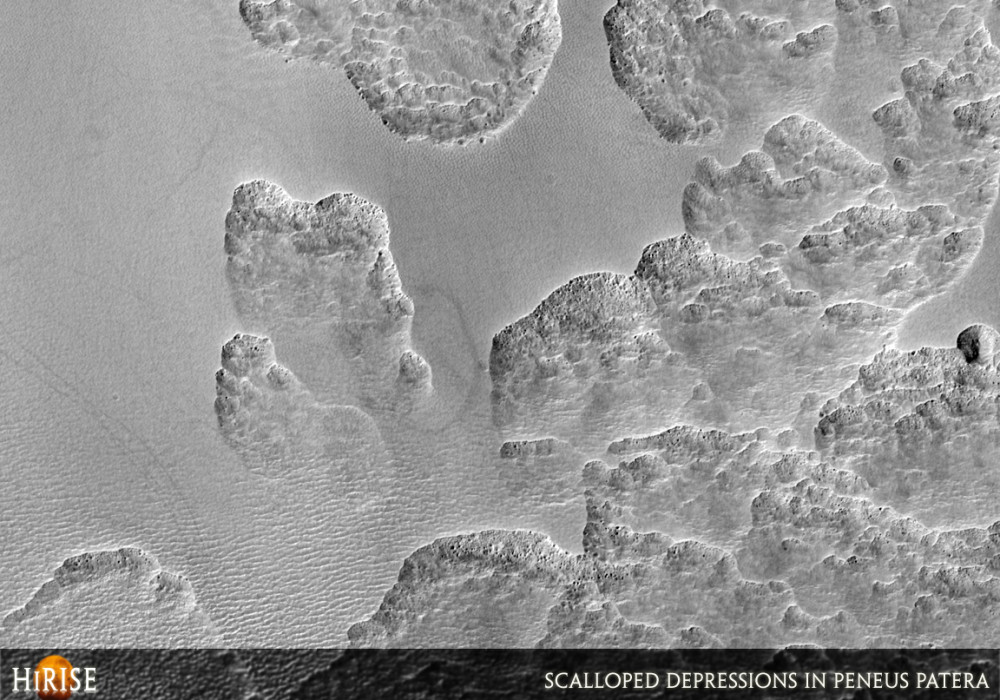