Scallops and Polygons in the Utopia Planitia

This image shows a portion of the Utopia Planitia, marked by polygonal features bounded by cracks and depressions in the mantle that possess scalloped edges.

Scalloped pits are typical features of the Martian mid-latitude mantle. Their presence has led to hypotheses of the removal of subsurface material, possibly interstitial ice, by sublimation (ice going directly from the solid state to the gas state). Their formation most likely involves development of oval- to scalloped-shaped depressions that may coalesce together, leading to the formation of large areas of pitted terrain. Scalloped pits typically have a steep pole-facing scarp and a gentler equator-facing slope.

On the surface surrounding the scalloped depressions is a polygonal pattern of fractures. This is commonly associated with scalloped terrain, and indicates that the surface has undergone stress, potentially caused by subsidence (sinking), desiccation (drying out), or thermal contraction. These polygon features are similar to permafrost polygons that form in polar and high alpine regions on Earth by seasonal-to-annual contraction of the subsoil. On Earth, such polygon features are indicative of the presence of ground ice. Several cracks cut through the side of the scallops suggesting that they must be at least as deep as the scallops . The polygons may have been present previous to the erosion of the mantle.

The landforms we observe here most likely show that ice-rich permafrost is present or has been present geologically recently. At this latitude on Mars, the conditions of pressure and temperature allow water ice within the ground to sublime. The disappearance of the ice component of the ground probably leads to the formation of the depressions, a process that may still be active today. 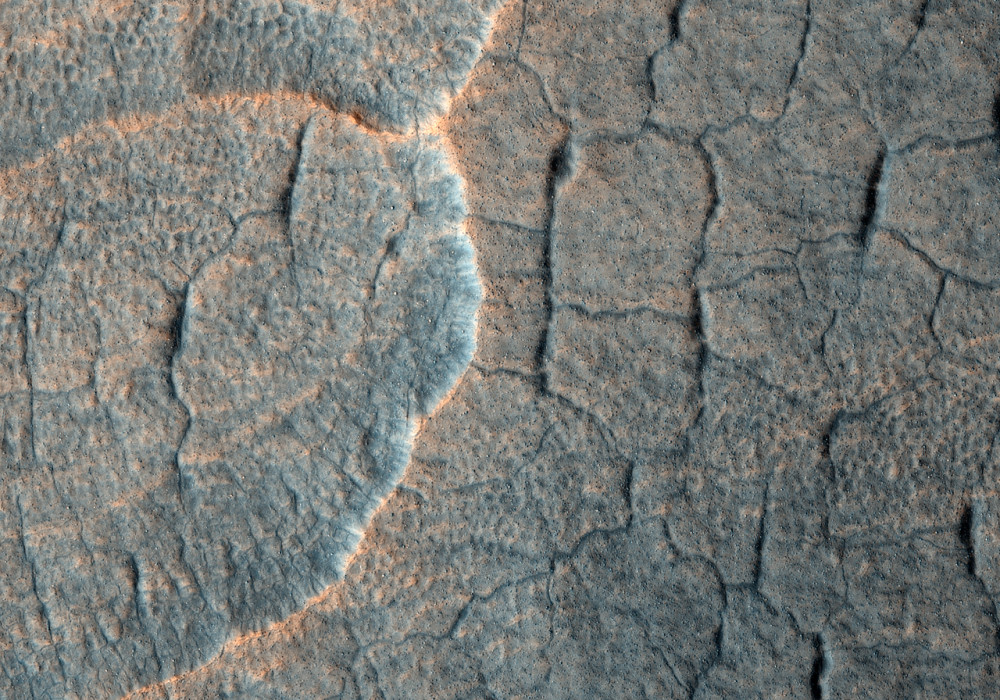