This image shows a series of long meandering ridges on the floor of a large ancient crater. Ridges such as these can be indicative of a number of geologic processes and tells us a story of the history of this region of Mars.

In some cases magma (molten rock) below the surface may fill an existing and somewhat vertical tectonic fracture, even pushing the fracture open in the process. As the magma cools, it solidifies into a tabular rock mass. This resulting cooled volcanic rock is called a “dike.” The new rock is often harder and more resistant to erosion than the surrounding country rock (the fractured rock of the original landscape). Later the entire region might have experience erosion from wind or water, removing weaker rocks and soils and leaving stronger rock outcrops standing. As the landscape is stripped away the harder volcanic rock remains standing as a long wall or ridge.

Alternatively glaciers often contain internal rivers from melting ice that flow along their base where the ice meets the ground. These subglacial rivers can carry enormous amounts of rocks and soil sediments, depositing them along their length. When the glacier retreats it leave behind a narrow ridge of river-bed sediments that stands above the surrounding surface. In this case the ridge is called an “esker.”

A river flowing along the surface in the absence of a glacier can produce erosion and deposition along the river bed. It can also chemically alter the river bottom, through deposition of minerals and salts that cement the soils and rocks. Later, after the river has dried up, erosion of the landscape can leave the altered river bed standing above the surrounding terrain, called an “inverted channel.”

So what happened in Peta Crater? Analysis of this image might reveal characteristics, such as layers along the ridge walls that would indicate the ridge was deposited by flowing water. Rocks and boulders might be found eroding from the ridge, their size and shape offering clues to the strength of the ridge material; fractured and angular solid rock from a dike or loosely bound rounded boulders tumbled along a river bed. 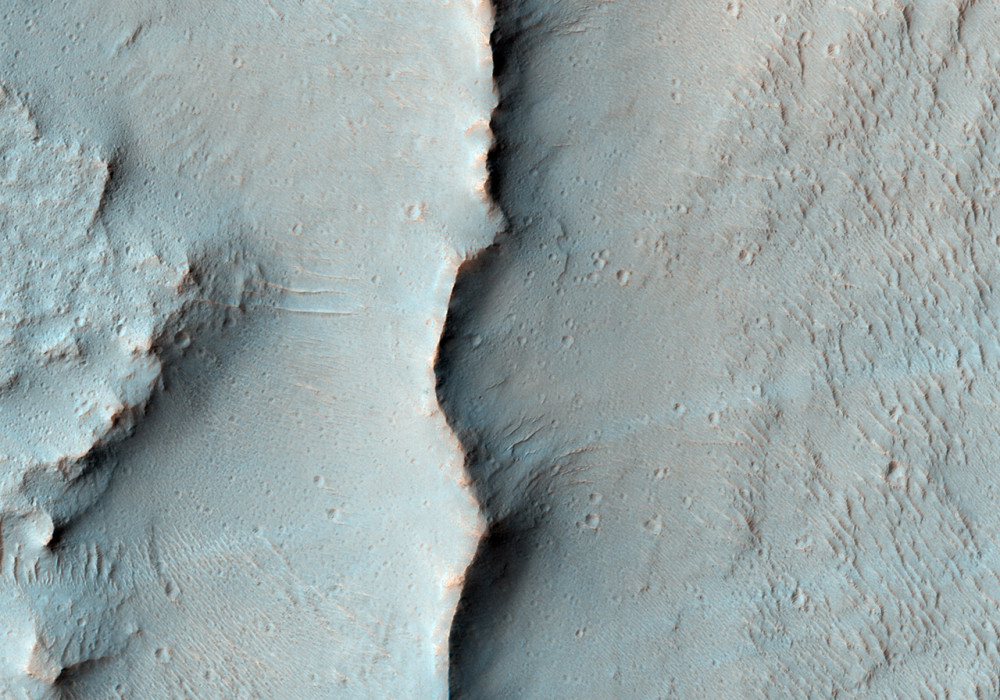