Slope streaks are small, dark (occasionally bright) marks visible in many dusty areas on Mars. Some people have proposed that they are the traces of liquid water, but most scientists think that they form when very thin layers of fine dust is disturbed and slides downhill.

Fine details of these streaks can only be seen by HiRISE – for example, the streak on the right encountered a crater as it moved downhill, leaving gaps below it where the dark streak did not continue. Why might it have been interrupted by that crater, but the streak on the left was not interrupted by either crater in its midst? The right streak also seems to follow along the ridges at the south end, traveling up the sides a little, but not overtopping them. What could that tell us about the material that is moving downhill, or its speed? There are also faint markings inside the streaks that run parallel to the streak edges – maybe this is another clue as to how they form.

Take a look at where all the streaks start in this image (slope streaks usually start at a point and widen as they move downhill, so that will also tell you which direction is downhill in this scene). Many of them start at a small outcrop of a rocky layer . Perhaps falling rocks from those steep hills initiated the dust avalanches that formed the streaks.

Since this is what we call a monitoring image, we can also compare it with past images of the same spot. In this case, at least one new slope streak has formed in the last five years! Studying repeated images of the same spot like this can tell us how often new streaks form, how old streaks are, and how they brighten over time. 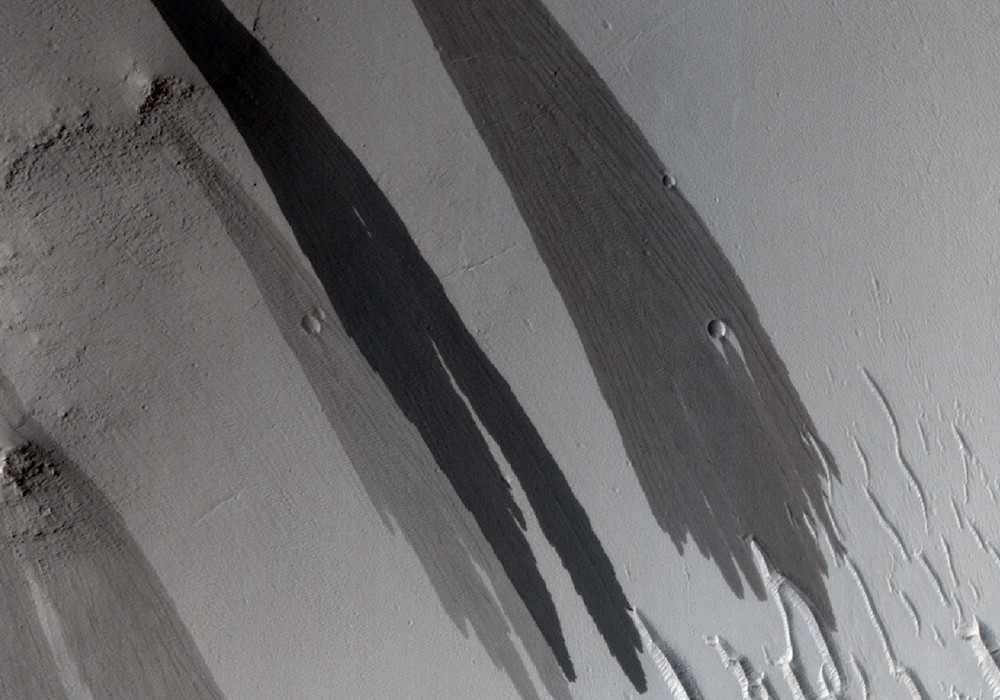