Olympus Mons is the largest volcano in the Solar System and is thought to have been active in the relatively recent past (which on Mars means many millions of years ago). While this towering giant gets a lot of the attention, it is surrounded by a vast field of other volcanic features. This HiRISE image takes a close look at one set of intriguing landforms: small cones.

Cones similar to these are found atop the freshest lava flows on Mars in Athabasca Valles. In that location, HiRISE found proof that they formed by steam exploding through the lava flow. The steam was produced by boiling water (or ice) in the ground underneath the lava flow. Could the same thing have happened here?

Unfortunately, HiRISE finds that this area north of Olympus Mons is covered in a thick layer of dust. While the wonderful resolution of HiRISE reveals details of the ripples in the dust, it cannot show us what is underneath the dust. Therefore we cannot prove that these cones formed the same was as the Athabasca Valles cones. They could be small volcanic vents, but it is unlikely that so many small eruptions would have taken place so close together.

However, since we cannot show that the ground under the dust is lava, we cannot rule out non-volcanic processes. Still, the similarity in the shapes and sizes of these cones to the ones in Athabasca Valles leaves open the possibility that water and lava interacted explosively here.
Written by: Laszlo P. Keszthelyi   (18 February 2008) 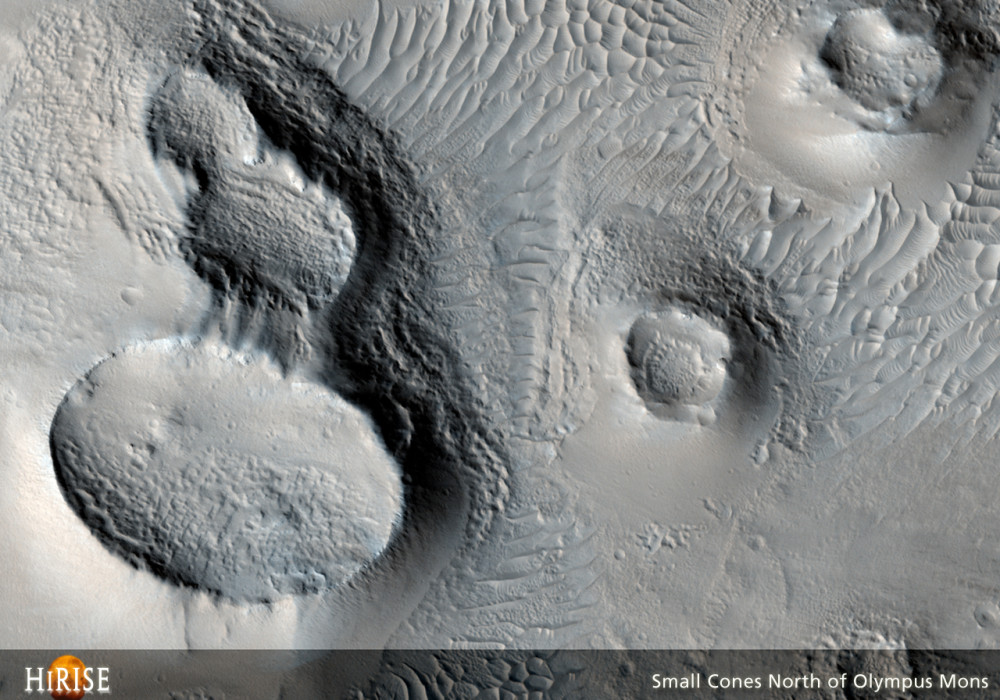