Sand dunes are among the most prominent wind-formed features found on Mars. Their morphologies depend on the winds and also on the local supply of sand grains, so they provide clues to the nature of both the Martian atmosphere and surface.

Dunes form through the accumulation of coarse sand grains carried by the wind by means of saltation, or bouncing along the surface. Monitoring the present day dune activity can help determine the timescale over which Martian rocks are eroded, as the impacting grains sandblast the surface over time. The sands of Mars must be continually replenished as the coarse grains are ground into fine dust by repeated impacts. Finding the hidden sources of fresh sand is a challenge for HiRISE.

This image was targeted at a point in Mitchell Crater in the southern highlands of Mars where sands abruptly appear and spread north. The sands seem to derive from the edge of an eroding mesa ( shown here with an arrow ; 8.66 kilometer, or 5.4 miles across). A close-up view of the terrain nearby suggests that boulders and sand have been excavated by erosion from beneath brighter, polygonally fractured ground (1.45 km, or 0.9 mi across).

This rocky layer may originally have been a lava flow; Martian lava flows are predominantly composed of basalt, which would account for the dark color of the sand. The polygonal pattern of the bright upper layer may be due to repeated freezing and thawing of the soil that buries the lava flow. The tracks of dust-devils are clearly visible on the smooth, sandy surface but largely vanish when they cross into the polygonally fractured terrain.Written by: Circe Verba and Paul Geissler   (6 February 2008) 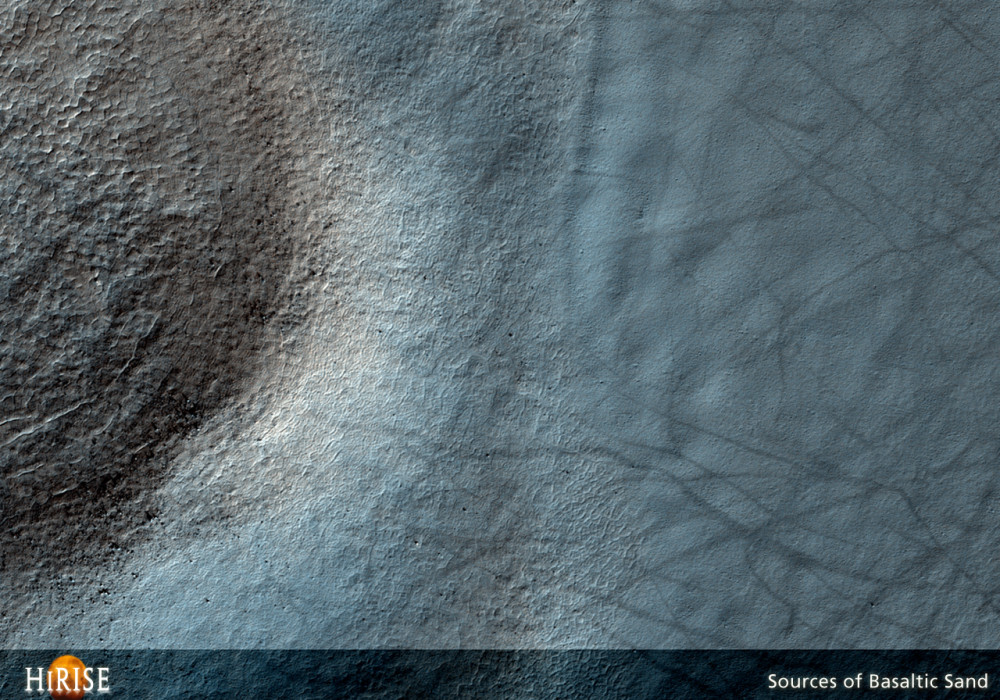