A wide variety of south polar terrains are on display in this spectacular HiRISE color image. The reddish material in the upper two thirds of the image is the south polar layered deposits (SPLD). These deposits are a stack of layered, dusty water ice. Scientists believe that these layers record previous climatic conditions on Mars, much like terrestrial ice-sheets provide a record of climate change on the Earth.

This image shows the face of one of the many scarps or shallow cliffs that cut into the polar layered deposits. These scarps expose the internal layers within the SPLD. You can see these climate-recording layers in the upper two thirds of the image running from lower-left to upper-right.

The terrain in the lower third of the image is quite different in both appearance and composition. The bright, white-ish material is a thin covering of carbon dioxide ice draped over the flat areas of the SPLD. This covering of carbon dioxide is being eroded away by expanding flat-floored pits. Parts of the floors of these pits show the reddish brown coloring of the underlying polar layered deposits. These pits have eroded the carbon dioxide ice layer to such an extent that only isolated mesas remain today and even these shrink in extent by a few meters each year.

These mesas also have several layers within them, indicting that they likely contain a climatic record, albeit a much shorter one than preserved in the SPLD. Most of the isolated mesas have white-ish tops; however, some (near the foot of the SPLD scarp) have reddish tops. This may either be due to bright carbon dioxide ice thinning to reveal the older (and darker) carbon dioxide ice that makes up the main body of the mesa, or perhaps dust has settled out of the atmosphere to cover the brighter frost. There was a large Martian dust storm earlier this year which could have caused either effect.Written by: Shane Byrne   (2 January 2008) 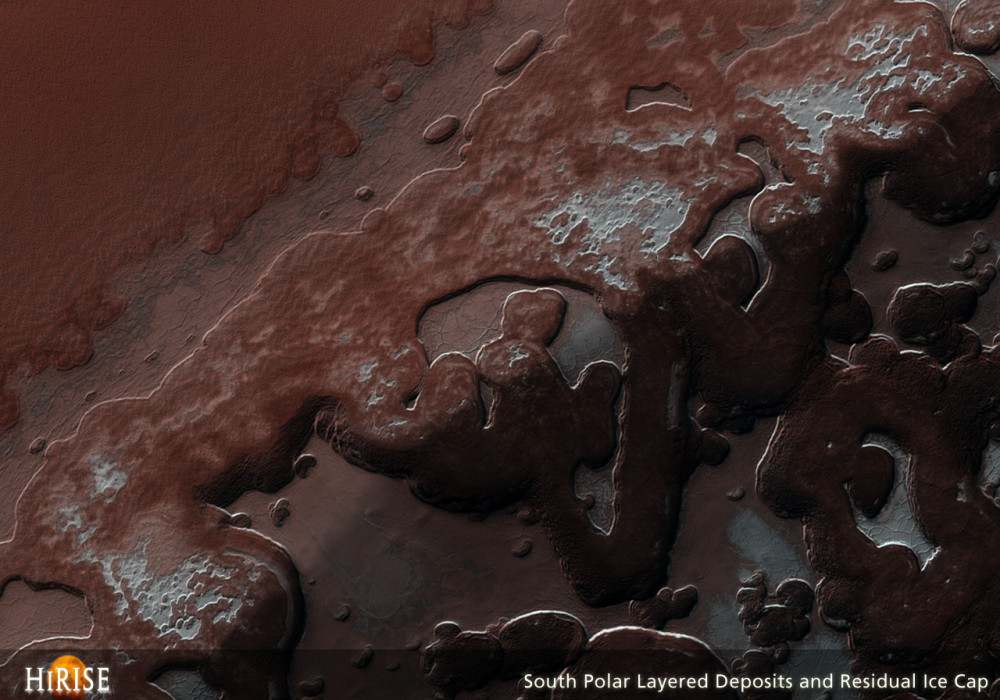