Relatively high-standing smooth material is broken up by circular, oval, and blob-shaped depressions, forming a pattern called “swiss cheese” terrain. The high-standing areas are carbon dioxide ice with thicknesses probably of several meters. The depressions are thought to be caused by the removal of carbon dioxide ice by sublimation (the change of a material from solid directly to gas). By looking at different sized depressions in an image such as this, and by comparing images of the same place from year to year, the development of “swiss cheese” terrain can be observed.

The sublimation process may begin anywhere as a small depression. Once this small depression is formed, it expands laterally in all directions, creating the rounded depressions we see today. As most depressions seem to have a similar depth and have relatively flat bottoms, there is likely some layer below, possibly of water ice, that cannot be as easily removed by sublimation. Thus, while the south polar residual cap as a whole is present every year, there are certainly annual changes taking place within it.

Especially apparent and interesting in this image are the strips of material that parallel the edges of many depressions. Often there are two or more concentric strips that are smooth like the surrounding surface, but seem to be lower than the surrounding surface and in places appear to be tilted down towards the center of the depression. Inner strips are sometimes broken up into chunks. It may be that the uppermost smooth layer is a bit more resistant to sublimation than the material just below it&emdash;the quicker removal of the underlying material might cause the stronger upper layer to detach from the surrounding terrain and settle down towards the center of the depression.

Alternatively, these ringing strips may indicate that many layers are present within the carbon dioxide ice. Another interesting feature is the faint crisscrossing network of ridges on the upper smooth terrain. These may also be complexly involved in the sublimation and deposition of carbon dioxide ice.

With the high resolution capability of HiRISE, we intend to measure the amount of expansion of the depressions over one or more Mars years. Knowing the amount of carbon dioxide removed can give us an idea of the current atmospheric and climate conditions, and possibly how Mars climate may be changing. Written by: Patrick Russell   (1 August 2007) 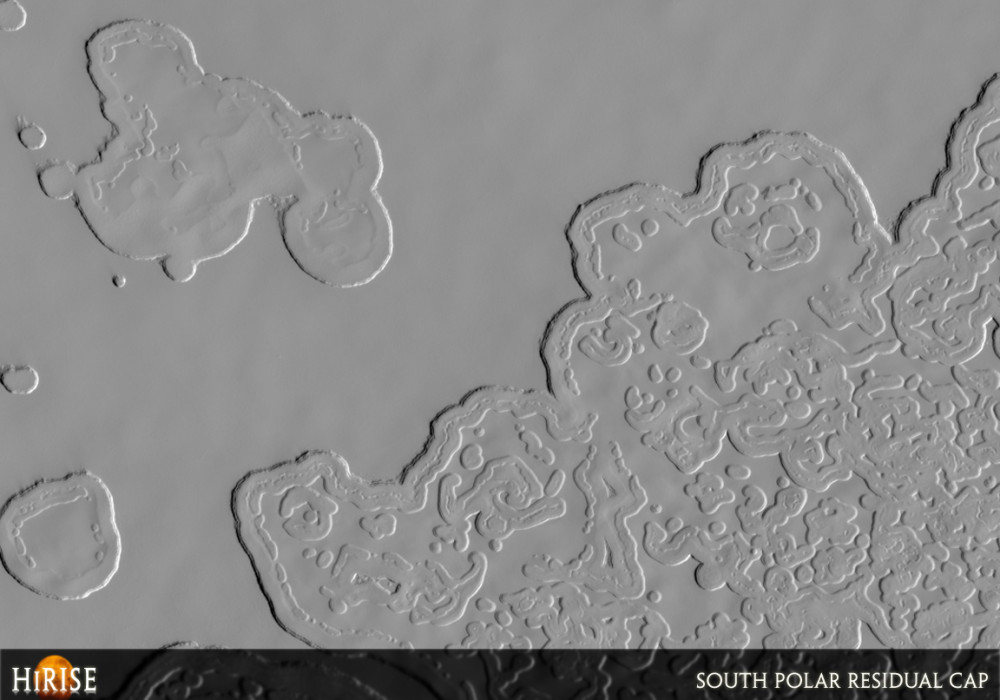