As can be seen in this HiRISE image of the south pole residual cap, relatively high-standing smooth material is broken up by circular, oval, and blob-shaped depressions. This patterned terrain is called “swiss cheese” terrain. The high-standing areas are carbon dioxide ice with thicknesses of several to approximately 10 meters. The depressions are thought to be caused by the removal of this carbon dioxide ice by sublimation (the change of a material from solid directly to gas). As most depressions seem to have relatively flat floors, there is likely some layer below, possibly made of water ice, that cannot be as easily removed by sublimation. Complicated shapes arise when neighboring growing depressions intersect.

In HiRISE images such as this one, it is evident on the slopes of the large, especially high mesa just above the center of the image that the carbon dioxide-rich material may be constructed of several individual horizontal layers. However, it also appears that as erosion eats into the mesa, pieces of a stronger mesa surface layer break off and are left strewn on the mesa slopes, where they may give the appearance of layering.

An interesting feature in this HiRISE image is the crisscrossing network of faint ridges and troughs on the upper smooth terrain. These may also be complexly involved in the sublimation and deposition of carbon dioxide ice.Written by: Patrick Russell   (16 September 2007) 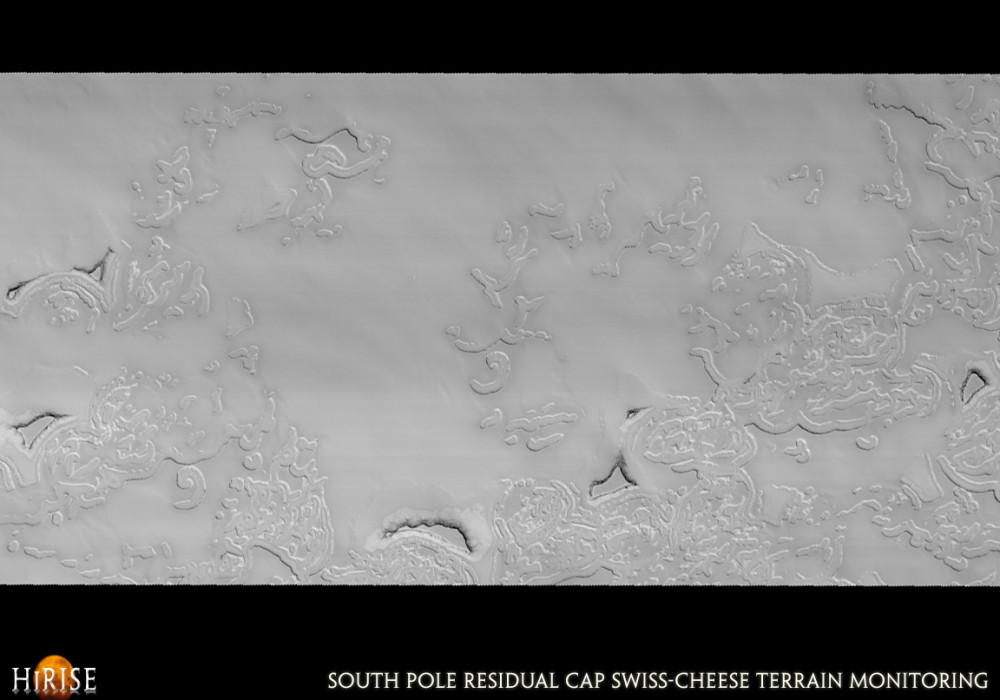