This observation shows a Southern hemisphere crater with gullies, dunes, periglacial modification, bright rock deposits, and dust devil tracks. Although these features are all common on Mars, there are not many places that have all of them together as viewed here.

The gullies seen at the top of the image are likely caused by wet debris flows. They have deposits of multiple ages. The gully on the left has bright deposits that have been modified by periglacial processes overlain by slightly darker deposits that have not been modified. Periglacial processes, such as seasonal freezing and thawing, are responsible for the polygonal fractures seen near the gullies and around the image.

The dark material in the center of the image is a dune field. There are several different sizes and orientations of dunes—these different orientations indicate that the dominant winds in the area have changed throughout time.

The dark streaks that criss-cross on the outskirts of the dune field are dust devil tracks. Dust devils are spinning cells of dust that travel across the Martian surface. As they move, they pick up and redeposit particles, as well as disturbing dust on the surface. They are responsible elsewhere on Mars for removing dust from the solar panels of the Mars Exploration Rovers Spirit and Opportunity, which has helped to extend their missions way beyond the 90-day primary mission.

The subimage, 750 meters across, shows dust devil tracks near the southwest edge of the dune field. The bright protruding rocks to the right of the image are either being exposed or being buried as the dunes migrate.

Note that the black rectangular feature near the top right of the full image is a data gap resulting from data transmission problems; it is not a real feature.
Written by: Kelly Kolb   (20 October 2010) 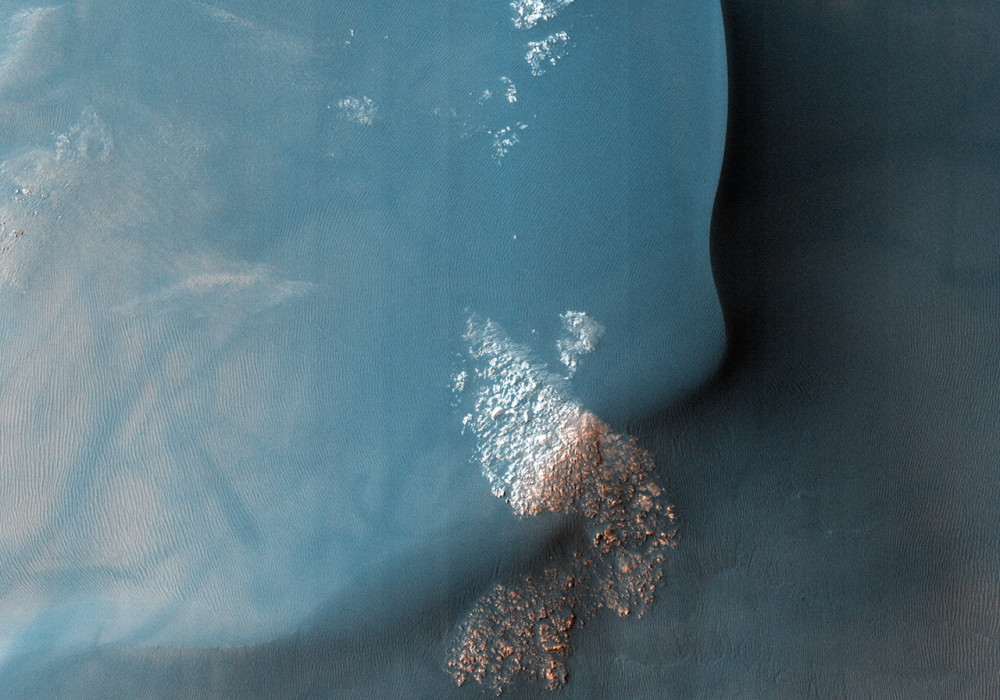