This observation shows two southern hemisphere craters. These craters are about the same size, approximately 800 – 900 meters in diameter, and appear to have experienced parallel histories. Both craters show dunes and gullies with similar orientations.

Several generations of dunes can be seen in the interior of these craters. The largest barchan dunes trend northwest-southeast with their slip faces facing the southeast, indicating that the winds forming them came from the northwest.

There are smaller dunes that superpose the large dunes with a different orientation. Different dune orientations are a sign of a changing dominant wind direction. Both craters have similar dune orientations, which is expected because of their proximity.

The two craters also both have gullies originating at layers on their south-facing walls. The gullies are mostly in shadow, but adjusting the brightness and contrast of the image allows them to be seen. The subimage is approximately 300 meters across and shows the gullies in the crater on the right. Gullies are thought to form by liquid water flowing down slopes, but the source of the water and how it is involved in gully erosion is often debated.

One theory proposes that near-surface ground ice melts to form the gullies. An important part of this theory is the direction and amount of insolation (sunlight) a slope receives. Since these craters are close to each other, they receive similar insolation, which could explain why the gullies are in the same location in them.

Another theory suggests that subsurface water from an aquifer forms the gullies. If an extensive aquifer existed, it would flow downslope. If the regional slope trends towards the south, that could explain why the gullies are where they are (the water would come from behind the slope to form the gullies).

HiRISE is showing us unprecedented details of the gullies and will no doubt bring us closer to understanding how these mysterious features form.
Written by: Kelly Kolb   (9 June 2010) 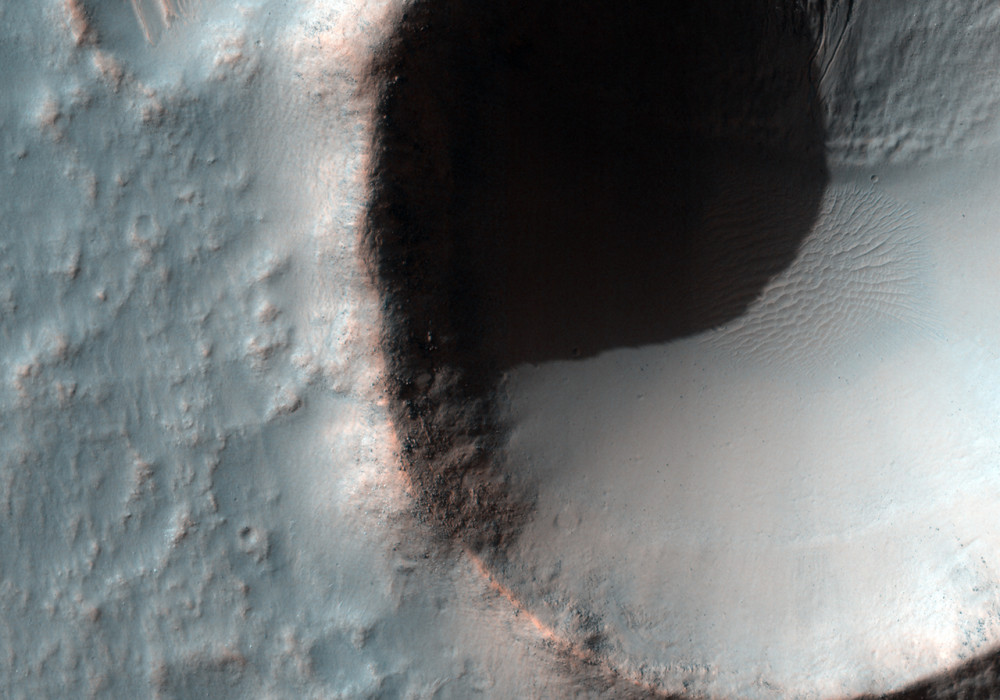