Spokes, Creep, and Channels in a Crater in Utopia Planitia

This observation shows an unnamed impact crater located in Utopia Planitia; this crater is more than 10 kilometers (6.25 miles) in diameter and 700 meters (765 yards) deep. Different features in and around this crater may indicate fluid beneath the surface.

Linear features radiating outward from the crater’s rim are evident in the upper right and lower right parts of the full image. Closer examination shows these features are formed by rocks and finer soils that are located along a straight line; they are “spokes” produced immediately after the impact by very fast outward-moving materials ejected from the impact.

Because these ejecta came from deep under the crater, their composition will tell us what type of rocks are under the surface.

A MOC context image of this crater shows its ejecta materials form an elevated “pedestal,” shaped like a pancake. The pedestal is approximately 20 km (12.5 miles) in diameter. “Pedestal craters” such as this may have formed because ice beneath the surface melted when the impact occurred.

This subimage shows a portion of the west-facing slope inside the crater; upslope is to the right (East). In this subimage, East-West channels, some of them 6 meters (6.5 yards) wide, cut into the slope’s soils.

It is not clear if these channels were carved by dry landslides or by a fluid. The channels cut across relatively older, rock-rich, elongated ridges (e.g., location labeled “A” in the subimage) that are approximately perpendicular to the slope. By contrast, in location “B” relatively younger ridges are on top of channels, some of which have dunes in their floors.

Elsewhere in this crater, ridges transition laterally to ripples and fissures of similar orientation. One possible explanation for these ridges, ripples, and fissures could be creep . Creep is slow downhill movement of slope soils that are held together somehow, maybe cemented by ice or some other agent. From the cross-cutting relationships seen in this subset, we infer there may have been several alternating episodes of creep and channel formation. 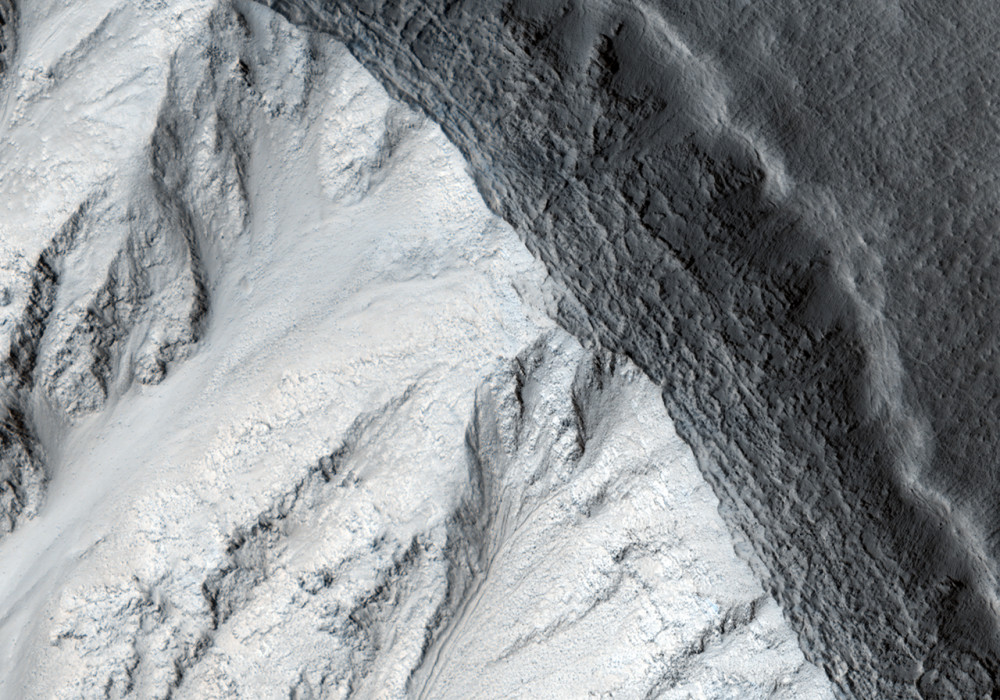